The 1948 Powell and Pressburger film The Red Shoes is one of my favourites: it’s about obsession with art, particularly ballet, and has amazing dancing, sets and dramatic scenes which are unforgettable. It gave me nightmares when I first saw it as a teenager but I have watched it many times since. I’ve even painted old pointe shoes red. Obviously I was excited to see Matthew Bourne’s production of The Red Shoes at Birmingham Hippodrome last night, and it didn’t disappoint. Bourne’s productions are often sideways takes on a well-known format, from an all-male Swan Lake to a Romeo and Juliet set in a detention centre, but this remained pretty true to the original in both plot and vintage feel. 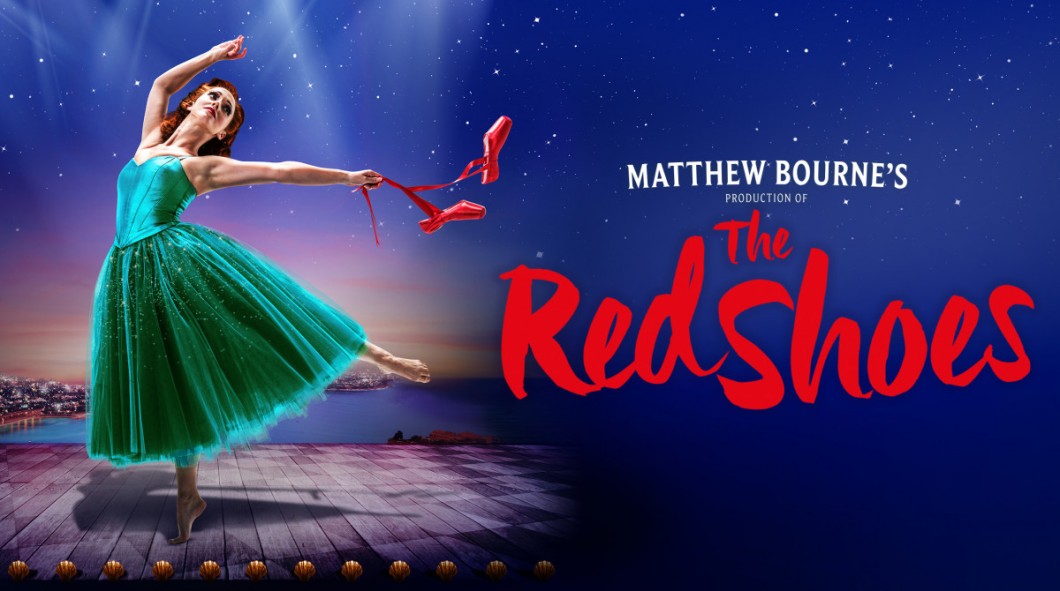 It’s a lavish and dramatic set designed by Lez Brotherson, with a rotating miniature proscenium which provides the perfect metaphor for the merging of art and life which the story hinges on, and this is brilliantly supplemented with photographic projections which mirror the hallucinatory scenes in the film. Seeing it on stage is a wonderfully immersive experience – the thrill and fear

that Victoria feels when dancing in the red shoes is felt by the audience, too in this production. The 17-minute ballet which is the heart of the film and Bourne’s staging is beautifully done, convincing, terrifying and giving a sinister twist to Hans Christian Andersen’s (already sinister) moralising fairy tale.

I can’t work out if it was Cordelia Braithwaite or Ashley Shaw who danced Victoria in last night’s performance, but her dancing began compact, almost restrained, as does Shearer’s in the film, providing an excellent contrast for the wilder, more abandoned dancing which the plot of both the overall ballet and the ballet-within-a-ballet require. The dancing was spot on – some of it almost a parody of a ballet, with a musical theatre feel to it, which works perfectly. Characters are expressed through every movement, however small – the haughty prima ballerina, the impatient musician, the imperious director Lermontov. Bourne says in the programme notes that the cast were to make the roles their own rather than replicate the performances in the film, and this they did, to some extent, but the appearance and movements of the dancers was uncannily like those in the film, helped by the authentic costumes.

From fun, vintage-style beach scenes to an East End music hall, bedroom to dance studio to stage, the complicated plot moves seamlessly and effectively. The music – not the original score by Brian Easdale, but Hollywood composer Bernard Herrman’s work re-orchestrated very effectively by Terry Davies – does what it should, setting the mood and heightening tension. Even die-hard fans of the film should love this – and the ending is even more shocking on stage, even if you know what’s coming!