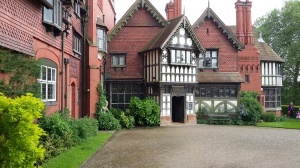 At the weekend we visited one of my favourite Pre-Raphaelite places: Wightwick Manor, a National Trust property on the outskirts of Wolverhampton. It’s a wonderful Arts & Crafts house begun in 1887 by local businessman Theodore Mander, founded on principals learned from the Pre-Raphaelites, William Morris, and particularly inspired by Oscar Wilde’s lecture ‘The House Beautiful’, which Mander attended and took notes on. Wilde’s ideas, drawn from Morris and Ruskin, centred around beauty and pleasure (and occasional utility); Wightwick embodies these in the most dramatic and appealing way possible. The Manders family went on to collect Pre- 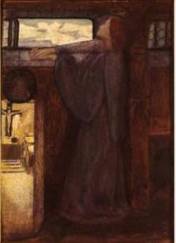 Raphaelite works well into the twentieth century, now augmented and displayed by the National Trust, and the house is an absolute feast of Pre-Raphaelite and Arts & Crafts works of art, furnishings, fabrics and decoration. They also cultivated the acquaintance of several Pre-Raphaelite descendants, and had some very exciting tea parties there.

Many of the works they own aren’t on display (though I was thrilled to have a private view of 9 Elizabeth Siddall drawings), but the rich collections includes Rossettis, Millais’s, Burne-Jones and many more. What really strikes me, though, is what a fabulous collection of the work of women Pre-Raphaelites is here. All too many galleries and exhibitions have few women Pre-Raphaelites on show, but here, there are some corkers: Siddall’s St Agnes Eve (right) – one of my favourite paintings – and The Haunted Wood are here, as well as Emma Sandys’ Elaine (left), one of several works attributed to Emma

more recently, having previously thought to be the work of her brother. Lucy Madox Brown’s The Tomb Scene from Shakespeare’s ‘Romeo and Juliet’ (Act V: sc.3) is on display – probably her best work; and Evelyn de Morgan’s other-worldly The Mourners – a 1917 response to war in a very Pre-Raphaelite style – is also here. There are also two wonderful images of Christina Rossetti, both by her brother Dante Gabriel, but my favourite is the cartoon ‘Christina Georgina Rossetti in a Tantrum and destroying the Contents of a Room’; it beautifully undermines everything we expect about the apparently demure poet.

There are some wonderful works by William and Evelyn de Morgan, including some beautiful tiles, and the Trust is fundraising to be able to provide an exhibition space for the De Morgan Foundation (find out more here). There are also Kelmscott Press books and a large number of other books and works on paper. I’m excited to see that the full collections of works at Wightwick Manor can be explored online – I shall be spending some time on this!

The immersive Pre-Raphaelite experience is what makes Wightwick unique. The information and the helpful room stewards means that one can quickly being to understand the life that the Manders family, across generations, lived here as serious art collectors, but simply to look around is to begin to see how the Pre-Raphaelite aesthetic plays out: the richness of colour, texture, detail, pattern, is overwhelming, but somehow quickly settles in one’s mind as the colours and organic, natural shapes are drawn together in the décor. Many will find it too much, perhaps, but for me it is a wonderful mixture of the medieval and the late-Victorian: harmony and beauty prevail.

For those who have children with them, the dressing-up box and the nursery with games which can be played were a huge bonus; I wouldn’t have had nearly so much time to explore without those to distract my son! The beautiful Edwardian gardens would have been more of a draw if it hadn’t been raining so hard, but a quick game of hide-and-seek still took place. 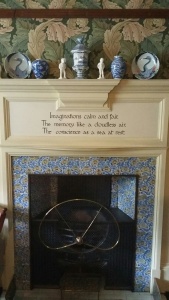 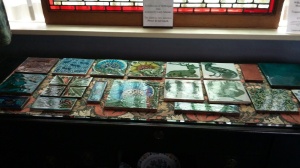