Treatment in the nineteenth-century lunatic asylum 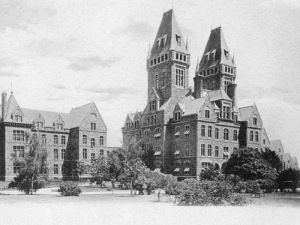 The nineteenth and early-twentieth century asylum was most likely to be run on a system of ‘moral management’. The term ‘moral’ is used here in a somewhat insidious way: it refers to a system of bodily and mental health, but has its roots in a conventional Victorian morality which insisted upon self-discipline above all else. There were, however, many advantages to the system of moral management: it offered patients the opportunity to take responsibility for their own actions, something which earlier centuries would have considered impossible for the insane (no matter the degree of insanity). The system also offered patients freedom from isolation and physical restraints, and other tortuous ‘treatments’, instead offering them routine, exercise, good food, fresh air and regular occupation (a programme which still sounds quite practical today). Consequently, asylums ideally were large buildings with airy communal rooms, and, significantly, grounds in which patients might exercise, take walks, and even do some gardening. The Victorian belief in fresh air and exercise became more pronounced into the twentieth

century, and consequently the grounds of an asylum were extremely important.

Treatments available, in addition to this healthy routine, might include some rudimentary medication (such as sedatives, usually bromide), frequent immersion in cold or lukewarm water, and hypnotism. Restraints might be used where a patient was dangerous or likely to hurt him or herself, but – at least in theory – were meant to be used only rarely and in extremis. The emphasis was on the moral regime, however, through which a well-behaved patient might earn privileges, and patients could feel themselves to be useful members of the community, and thus restore their reason through self-discipline. Such treatment was effective in some cases, particularly milder cases, or illnesses such as post-partum depression or alcoholism, but was less effective for the criminally-inclined or the seriously disturbed.

When asylums became the standard place of care for the mentally ill, in the early 1800s, there was a big rise in the number of asylum

buildings, followed by another boom after the 1845 Lunatics Act. They were commonly built on regimented lines, yet often in imitation of the English country house. Large, airy common rooms, such as a lounge, recreation room and dining room, would be central to this (though patients were likely to remain segregated by sex throughout their time in the asylum). Most asylums would also have a chapel, since in the nineteenth and early twentieth century, religion was seen as helpful to patients, offering them ritual, faith and hope. The grounds would be laid out to facilitate outdoor activities for the patients, whilst ensuring that they did not leave the view of the staff, and consequently the building was itself an intrinsic part of treatment.

Violent or dangerous patients would be isolated, possibly in padded rooms, or restrained, while those perceived as less of a threat would commonly sleep in dormitories, where they could be seen easily by staff. Rooms for treatment, isolation, administration and sleeping would be laid out along corridors, with the communal rooms placed centrally. This plan was common throughout the nineteenth century, differing from the radial layout common prior to this (particularly for prisons), based on Jeremy Bentham’s Panopticon, which permitted all patients to be seen from a central point. This design was unpopular, however, for its cramped and institutional feel, and lack of natural light.