The Poetry of Form, inspired by Barbara Hepworth

Visiting the Hepworth exhibition at the Tate, I began to think about form. Hepworth’s fascination with form and structure is obvious in her sculptures: she looked, we assume, at a lump of marble or a piece of wood and began to perceive, however dimly, the form it might take in her hands. Sometimes the eventual form it takes is smooth, closed, irreproachable (and perhaps a little unapproachable, too). Sometimes it is open, inviting, offering unexpected glimpses and perspectives. In either case, the form invites us to consider it, ‘read’ it, re-evaluate it and our relationship with the world. Hepworth, as both a sculptor rooted in the English landscape and also a part of an international Modernist movement, was aware of the way in which form affects people, how sculpture interacts with us, with landscape, with the world, and the effect that a deceptively simple form might have upon the viewer.

How, I have been wondering, might I bring this concretised idea of ‘abstract’ form to bear upon poetic form? Bear with me; these are metaphors which might seem fanciful, but equally, I hope they may illuminate. Perhaps the poetic process might be equated in some way to the artistic one; a poet sees the kernel of an idea forming and develops it until it takes a form. This isn’t a woolly idea; I’m talking about prosody, the very shape of a poem and the way in which it is held together, structured, devised from building blocks which include not only language but also poetic devices such as metre and rhythm, alliteration, rhyme, imagery, metaphors and so on.

If the poet carves out a poem well from the raw materials (which are the words, the ideas, which are developed using the poet’s tools of poetic devices) then it may appear deceptively simple, though when viewed from other angles we can catch sight of unexpected complexities. Using a poetic structure (say, sonnet form or the villanelle) is not about pouring the words into a mould any more than Hepworth’s sculptures were created this way (even works that were moulded were always finished by hand, indicating her anxiety with artistic integrity); rather, it’s about the poet carving out ideas into a form that is meaningful, chipping away – a word here, a comma there. Like a sculpture, its imperfections reveal its humanity, giving it tactile appeal which makes us pause.

I’m not really talking about ‘concrete’ poems here, which take a particular shape on the page (such as George Herbert’s ‘Easter Wings’), but about poetry more generally. After all, poetry is primarily defined by form: we can look at a page and see the difference between poetry and prose, but the rhythm which holds it together and the structure it employs makes it a more complex matter than just the length of the lines. 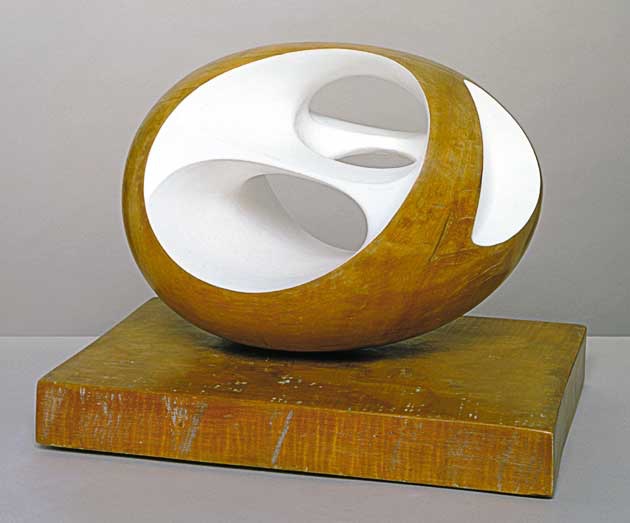 Enough of abstraction; I’d like to try to apply this idea. Look at Hepworth’s ‘Oval Sculpture’ (1943). It has a clear, distinct shape, the oval defined by its colour, as though it was once a smooth, closed form. The carving has opened it up, so that now we get a fresh view of the material and also of the world around us: look through it at different angles and you see things differently. It’s a complex form, difficult to see exactly how it works, yet it’s also tactile, pleasing to the eye and tempting to the touch. Moreover, you can read into it the metaphors of the enfolding landscape of Cornwall which Hepworth abstractly depicts; the idea that something does not need to be figurative to make us think of something. Its curves and waves echo the sea and the hills; moreover, in its smoothness and seeming randomness it also recalls the shapes of stones washed smooth by the sea.

A poem can be an object, a thing, in a similar way. The Modernist poet H.D. wrote poems which are artefacts, too. This is ‘Oread’, one of her more famous works:

hurl your green over us,

cover us with your pools of fir.

The Oread is a sea nymph, the speaker of the poem who seems to be conjuring up the powers of the sea. The poem is short and deceptively simple; it doesn’t take much thought to penetrate its central metaphor of the sea as a forest. The poem is a good example of Modernist poetry which aims to reduce language and ideas to a minimum, to focus on the image not the words, and the beautiful simplicity of this poem is one of the reasons for its popularity. But it still retains a structure: the first line is simple, one-syllable words calling on the sea like an ancient poet summoning his Muse. The dash causes us to pause (try reading it aloud) before the spiky consonants of the ‘pointed pines’ cause the sibilance of ‘splash’ to break over the rocks of the reader. ‘Pines’ is repeated, linking the two, and the language intertwined sea and land, as though the sea is surging inland and taking over. The glimpse of the sea breaking over the rocks, just as the words are rushing over the reader, provides us with a surprising view, of a world covered with the deep green of the water, ‘pools of fir’, a very unexpected image. It’s as though the nymph is invoking the end of the world, the destruction of the land as the water embraces it.

This is a fairly quick reading of the poem, and of course I have chosen a sculpture and poem which have some similarities to focus on, but the idea of seeing form as a concrete thing which can be given literal shape in sculpture and read in a similar way in poetry is one I rather like. I’d be interested to know what others think.

Discussing these ideas with a friend, the poet Sarah Doyle was enlightening, hearing the views of a poet on her writing. She said:

I take a fairly architectural approach to the writing of formal poetry. For example, I will compose the first and last two lines of a sonnet, and then generally write (build) inwards, or at least ‘jump around’ until the poem is ‘filled in’. I almost never write a poem ‘in order’.

I consider that I create/form, as much as write, poems. And the crafting/drafting/editing stage is perhaps not dissimilar to a sculptor removing excess material. But I take a very pragmatic view of writing, which I am not sure others share. I am fascinated by form and prosody generally, and frequently perceive poems as physical things, with all the hallmarks that implies. Curves, contours, textures…

This sculptural or even architectural way of writing is one which enables the poet to scaffold ideas around a structure, and to play with that structure and shape it as required. I find this a helpful way of thinking about poetry.