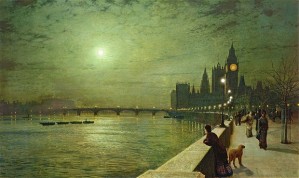 A recent lecture for the Pre-Raphaelite Society asked if John Atkinson Grimshaw was more than a painter of moonlight. Simon Poë, the speaker, made a good case, but was frank about Grimshaw’s predilection for certain scenes and effects of light. Grimshaw is, Simon suggested, a painter ‘more loved than he is admired’, which seems probable to me; I feel affection for Grimshaw’s moonlit paintings and the golden Autumn glow which suffuses many of his other pictures, and there is something cosy, nostalgic even, about them which makes me think of Christmas and home. But I probably don’t think of him as a ‘great’ artist, and find the fairy paintings rather twee. Nonetheless, after Simon’s lecture I probably have more admiration for him as a man than I did, since he clearly worked very hard right up to the end of his life to make a living from his painting and support his family, despite not having been professionally trained and despite not really getting to the top of his profession. However, perhaps his distinctiveness comes in part from this lack of training; he was not schooled in a certain style, and thus developed his own.

Grimshaw was a Yorkshireman, and it seems that he is still better known in Yorkshire than he is outside it. Many of the paintings are set in named locations around Leeds (often the same location) and Grimshaw certainly has a formula: a road, path or river, a building or two to the side, and the atmospheric lighting effects. Yet as Simon said, Grimshaw’s muted pal

ette and masterly use of colour, combined with a few bright spots in the painting which draw the eye, provide his best claim to greatness as an artist. The paintings even gesture towards abstraction, in some cases, and Simon suggested that ‘You can see Jackson Pollock coming’ in the tiny light spots in some of the paintings.

Comparisons with Whistler are telling: Grimshaw’s ‘limited range of tones’ with which he ‘plays a nice tune’, to use Simon’s musical analogy, may seem in a similar key to Whistler’s style, but without the latter’s genius. Grimshaw’s paintings are often undeniably beautiful but they are also commercial: when he found something that worked, he stuck to it, hence the vast array of similar-seeming paintings. It’s difficult to argue that he was thoroughly exploring his theme, as other artists have done: he more or less replicated his central motif. However, Simon also showed us a wide range of other paintings by Grimshaw which I wasn’t familiar with, including classical scenes and aesthetic interiors as well as harbours, and in these his work seems closer to that of Alma-Tadema or Leighton

So while Grimshaw’s moonlight paintings may not be the best, they were the first, and his work seems to pave the way for or gesture
towards many other artists’ work, not just those near-contemporaries I’ve mentioned, but also Rothko, Monet and Lowry. We can also see the influence of Turner (in my opinion) in some of his colouring and style. Grimshaw is more important than just a signpost to other artists’ work, though – his moonlight paintings are still marvellous, but perhaps you wouldn’t want a whole gallery of them.