The Poetry of Evelyn de Morgan

Evelyn de Morgan (1855-1919) is one of those Pre-Raphaelite women gradually emerging from the shadow of men. She has been eclipsed by her husband, William de Morgan, Pre-Raphaelite potter and ceramist (and novelist, though I don’t think his novels are much read today), but even superficial research shows her as an intelligent, fiercely creative woman who pursued her own artistic ideas and philosophical beliefs throughout her life. I am no expert on her, but am learning quickly, particularly through visiting the De Morgan Foundation’s gallery at Wightwick Manor, where you can see a range of her most famous and significant paintings.

Recently I have spent some time transcribing Evelyn’s early documents – stories, poems, plays and diaries all written by the time she was 17, after which she either stopped writing, or (more likely) someone destroyed her manuscripts. It is thrilling work, because no one seems to have read these for a very long time, and they’ve never been published. Happily, on the whole her handwriting is easier to read than Elizabeth Siddall’s, and some of the poems are beautifully copied out in school-room copperplate. Others are harder, but working with a group of enthusiastic students from the School of English at BCU, we were able to help each other out. On a rainy day, in a room at Wightwick Manor, it was rather fun to read out extracts of what we had transcribed and discuss it. So far, we haven’t got more than halfway through the documents, but we have concluded a few things from her juvenile fiction.

We know she was clever and very well-read, and in her work there seem to be some traces of her reading: definitely Shakespeare and definitely Hamlet, I think, which surfaces in a couple of wonderfully hammy Gothic plays; possibly Walter Scott, and almost certainly Jane and Ann Taylor, whose somewhat gloomy and macabre poems for children were very widely read in the nineteenth century (their most cheerful is Twinkle Twinkle Little Star, the only one really to still be read). In the miserable tale of Little Gretlien, who goes to look for her pet lamb, finds it dead, and then dies herself, visited by an angel as she lies in the snow exhausted, there are definitely signs of the Taylors’ approach. In her painting Port After Stormy Seas (below) from 1905, a similar approach is seen, in which death comes as peaceful and welcoming, even to the young.

Evelyn became an ardent and active Spiritualist later in her life, and perhaps we can see the early stages of this in her fascination with death (pretty much every piece contained a corpse). But of course, Victorian literature, even for children, has always done this, with Christina Rossetti’s Sing-Song, for example, containing many dead children, mothers and animals, gently introducing the child to their mortality. True, Evelyn’s approach is not so gentle, but given her youth that’s not really surprising.

Her diaries make clear that she was studying, and she certainly is proud of herself when she works hard. She becomes increasingly focused on art, having started drawing at 15, and this quickly takes over from literary ambition. However, these early manuscripts offer an insight into her early imagination and visualisations. I’m looking forward to returning to them; her joy in creating permeates the page. 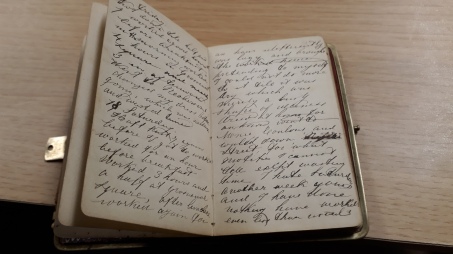 With many thanks to the De Morgan Foundation and their curator, Sarah Hardy, for supporting us in transcribing these works.