It’s always a pleasure to visit Penlee House Gallery in Penzance, and the current exhibition on Alfred Munnings in Cornwall is no exception, marking 60 years since the artist’s death. As with all their exhibitions, there is a strong Cornish link, but with a wider, national significance. Munnings is, of course, best known for his depictions of horses, some of which appear in this exhibition, but the focus is on the time he spent in Cornwall from 1910. After seeing Laura Knight’s painting The Beach at the Royal Academy, Munnings moved to Lamorna in 1910, and as this exhibition demonstrates he quickly became a part of the local artistic scene, befriending other artists in the area including Dod Proctor and Harold Knight. 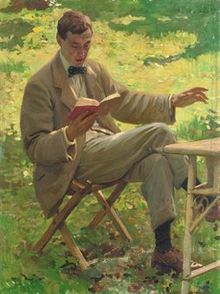 The exhibition opens with a caricature self-portrait which indicates Munnings’ eccentricity and enthusiasm, standing back from his easel and flamboyantly painting at arm’s length. A similar sense with a more serious side appears in the 1910 portrait by Harold Knight, Alfred Munnings Reading (left), where the artist delicately lifts his hand to add expression to what he is reading (aloud, one presumes); the sense of immediacy and movement in the painting makes it timeless despite the period dress; it captures a time and a feeling and sets the tone for the exhibition perfectly.

Many of Munnings’ own paintings feature animals, of course, such as Boy with Pony, in which a red-faced boy, on a sunny day, stuffed into a slightly tight Sunday best suit sternly ignores the pony beside him outside a circus, or The Grey Mare, in which a man leads a horse through the twilight. Munnings’ use of light and carefully chosen palettes are evident in both of these, while Springtime offers sunlight filtering through trees onto horses. This interest in light – shared by most of the Newlyn artists – is apparent throughout the exhibition. Not only horses feature; there are quite a few cows (‘a most perfect model’, the cow, according to Munnings), and dogs (especially in hunting scenes, of which there are quite a few).

The exhibition makes a lot of his local circle, and to good purpose: the works on display by his friends and contemporaries reinforce a sense of a group painting similar scenes in the same place (many of them in Lamorna, which we walked to the day before seeing 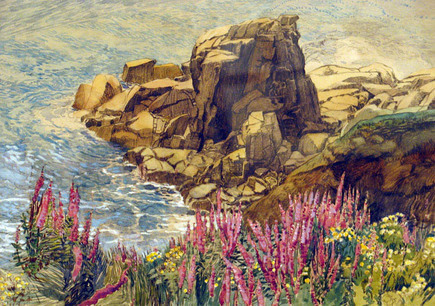 this exhibition, scrambling over rocks just like those Munnings painted in Lamorna Cove (1912), which we had admired for their architectural structures), demonstrating both similarities in subject and approaches, and enormous differences in style and purpose. These contemporaries include Frank Gascoigne Heath (with his wonderful Carn Barges, Lamorna, in particular); Eleanor Hughes, whose work I hadn’t come across before but is wonderfully detailed and with a calm and restrained air which has a strong appeal, especially with its dignified use of colour in paintings such as On the Cliff (right). 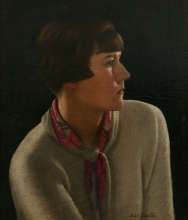 Women are quite well represented here, as they tend to be in exhibitions on the Newlyn artists; Ruth Simpson’s The Milkmaid and Sophie Bodinnor depict (presumably) local women, working, with unsmiling, intent faces and  wonderful surface lustre to the images. My favourite is Dod Proctor’s self portrait (left), though, with its resolute expression and refusal to look at the viewer. I also loved Harold Knight’s The Toy Maker, which is almost Pre-Raphaelite (perhaps because of the model’s remarkable, crinkly hair not unlike Jane Morris’s, but with an occupation and fixity of purpose which we don’t see in portraits of Jane).

The works of Munnings on display often depict farming and rural life, including the aforementioned cows, though some include no figures at all, such as the marvellous Sunset over a Harvest Field (1912), below. 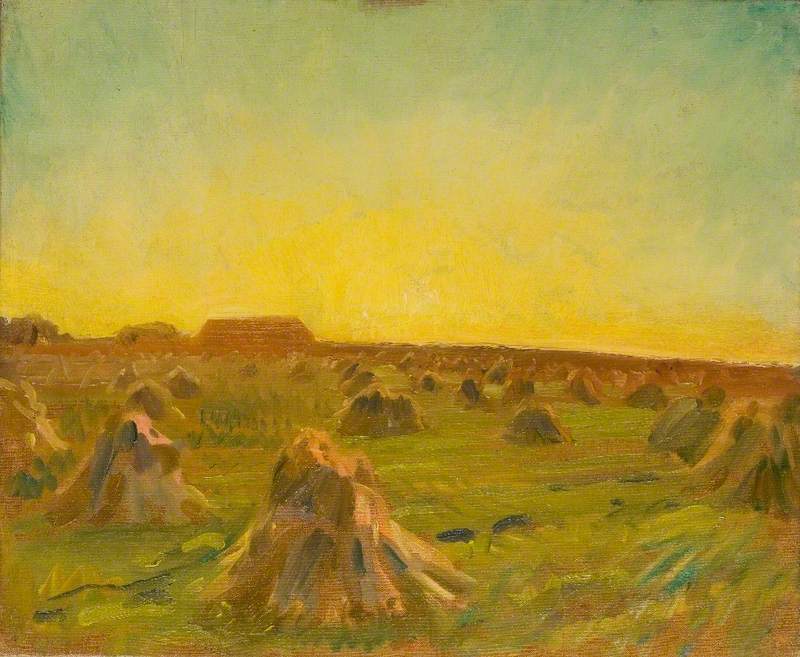 This uses a shade of yellow which Munnings only used during his time in Cornwall, and feels like a modern, reinvented Turner, almost impressionistic.

The final room is dominated, however, by Arthur Meade’s The Merry Springtime (1905), a 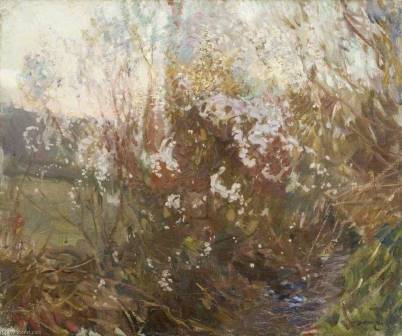 huge canvas of a woodland scene with bluebells, full of life and texture and dappled sunlight which is spectacular in the flesh (paint?) but can look rather chocolate-box and disappointing in reproduction. Smaller but equally entrancing is Munnings’ Spring Evening (1912), right, which captures the light of a bright Springtime along with the glimpse of the transient blossoms of Spring. It is as a painter of the Cornish countryside that Munnings excels, then, and it’s also a lovely reminder that there is more to Cornwall’s beauties than the sea: though some paintings in this exhibition are of the sea, there are more which capture the rural, the agricultural and the social, along with the joys of nature in the unique light of Newlyn and its surroundings.