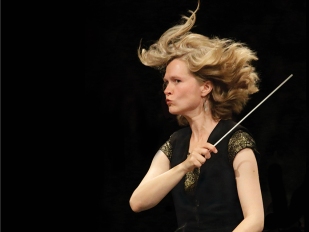 Last Saturday we went to hear the City of Birmingham Symphony Orchestra, conducted by Mirga Gražinytė-Tyla, perform a wonderfully Russian concert that left me thinking of St Petersburg, of Russian folk tales and of a particular sort of musical magic. I don’t really know the work of Mieczysław Weinberg, though I’m aware that Mirga has an enthusiasm for the work of this troubled Soviet composer, and this performance of Rhapsody on Moldavian Themes has sparked my interest. This particular work is one which was composed as part of Weinberg’s ‘rehabilitation’ in the late 1940s, when the Soviet ‘anti-formalism’ movement encouraged composers to produce traditionally focused works which celebrated Russian heritage. For something written with such an uncomfortable political genesis, it’s a lively and evocative piece (and, as the programme says, ‘one of the most successful examples of its kind’).

For many listeners, including the Times reviewer, Tchaikovsky’s Violin Concerto in D 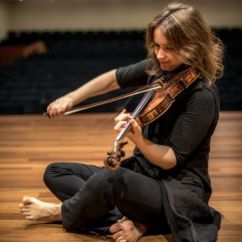 Major was the star performance of the evening. The violinist was Patricia Kopatchinskaja, herself born in Moldova, who began by taking off her sparkly shoes – perhaps a gimmick but it endeared her to the audience (especially when Mirga also removed her shoes!) but it gave me the sense of a freedom from convention and a desire to connect with the earth which fits the music perfectly. The programme notes tell me that at a difficult time in his career, Tchaikovsky was inspired to write this through working with a young violinist, Josef Kotek, and with the wild enthusiasm that Kopatchinskaja brought to her playing, it strikes me that there is something youthful about this concerto. It plays with form and structure unobtrusively, creating echoes and resonances in the listener’s ear and vivid, fresh pictures in one’s mind. The vigour with which it is played enhances the Russianness of the sound; I’ve heard this piece before but this time it sounded different, and I loved the difference.

The final piece of the night was Stravinsky’s The Firebird, a ballet score produced at the request of Diaghilev, who wanted to create a truly Russian ballet. The programme article indicates the precise requirements which the composer was given, using the details of the folk tale of The Firebird, a straightforward story in which a prince uses a feather from the Firebird to rescue a princess from a monster. In fact the closeness with which Stravinsky follows this story was emphasised in this performance by the use of surtitles to indicate the action which would be taking place in a ballet performance. I know the music and the story fairly well so was a bit conflicted about this, as I found the words on screen a little distracting, but overall I think it’s a positive way of enabling the audience to create their own images of the

action. Of course for many these visions of the Firebird will be influenced by having seen the ballet, or pictures of Bakst’s designs. For me the Firebird will always be Margot Fonteyn as depicted on the cover of a book I loved as a child. It’s thrilling and evocative music, in my view, which summons up Russian dances and folk music as well as following the storyline, and the CBSO brought all that excitement and thrill of the dance to their performance. It’s unusual to hear the full score performed, and it’s inspired me to rewatch the ballet online.