Birmingham history at the BMI

Traces of our Victorian past are all around us, especially in cities. Recently I took a group of students studying Victorian literature to visit the Birmingham & Midland Institute, where we had an excellent lecture by Samina, the Librarian, on the history of the BMI and the original Birmingham Library, now housed in the same building. The BMI was founded in 1854, by Act of Parliament ‘for the Diffusion and Advancement of Science, Literature and Art amongst all Classes of Persons resident in Birmingham and the Midland Counties’. That aim is still the guiding principal of the Institute, which continues to hold lecture series on very diverse subjects (which have been going for over 150 years, and I’m proud to have given a number of lectures there). The Institute was originally on a different site, next to the Town Hall, in an even larger building which was specially designed, but moved to Margaret Street, next to the School of Art, in 1965 after the demolition of the original building (to make way for a road which was never built). The building which currently houses the Institute was built in 1899 specifically for the Birmingham Library, and still retains a wonderfully Victorian flavour not unlike a really nice school building. Alongside is programme of

cultural activities (including poetry, lectures, performances, music, reading groups) it also supports a number of affiliated societies including the Magic Lantern Society, the Victorian Society, the Society for the History of Astronomy, the Midlands Genealogical Society and the Institute of Ramblers, which gives you a sense of how diverse the Institute’s interests are. (There are also a number of rooms which are hired out for events at a very reasonable price).

The Library, which was an early subscription library founded in 1779 by button-maker John Lee, was founded in a front room by Lee (after whom a room at the BMI is named) and his friends, moving to premises on Union Street before moving to Margaret Street in 1899. The remit of the Library (and I write this as Chair of the Library Committee) was, and is, to collect the best books of the day in literature, art and science. That’s obviously a rather subjective remit, and we interpret that as best we can given budgetary restrictions, but the real value of the Library lies in its historical collections, particularly of the late eighteenth and nineteenth centuries, with specific fields including Ruskin, Dickens, architecture, poetry, the history of science, and even detective fiction. It is a lending library as well as a research institution, and you can contact the Librarian at library@bmi.org.uk to find out more about the gems it contains! 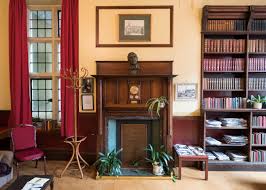 Birmingham is, and always has been, an eclectic and multicultural city, embracing all comers, of all backgrounds and trades, and looking to both past and future. Dickens saw this when he gave lectures to raise money for the Institute, recognising the value for a manufacturing city to promote and support the education and development of the tradesman, who might not otherwise have been able to access books and classes (from book-keeping to elocution, violin lessons to geology). The Library is still open for borrowing for a small subscription which also provides membership of the Institute and thus free or reduced price attendance at their events, and provides resources for researchers, a quiet place to study, or a range of books for the casual reader to borrow. The BMI and the Birmingham Library are still carrying on the best Victorian tradition of education (and entertainment) for all in the heart of the city.