Stanhope Alexander Forbes (1857-1947) is usually referred to as the ‘Father of the Newlyn School’ of artists, and is indelibly associated with the group of Cornish artists despite being born in Ireland; his move to Newlyn coincided with his first major success, and his paintings reflect the differing realities of life on the Cornish coast. It’s appropriate, then, that the Penlee Gallery in Penzance is holding a major exhibition of Forbes’ work which includes almost all of his best paintings (on until September 9th).

Forbes studied in France where he learned the ‘plein air’ style, and recorded life there while he studied, and some of these early French paintings are on display here (The Convent, 1882, reminded me in its effects of open air of The Pretty Baa Lambs by Ford Madox Brown). His move to Cornwall in 1884 was primarily a search for subjects, and he certainly found it; his works have atmosphere and local colour in bucketloads, and the appeal to tourists ever since is clear, but there is something more genuine, and less chocolate-box, about his work than simply a postcard painting. He celebrates local festivals, bands playing, people celebrating – but he also shows us the heartbreak and the sheer hard work of life on the coast. A Fish Sale on a Cornish Beach (1885, above) was one of his first Cornish paintings, and one which taught him the challenges of painting outside, as light and people moved and weather made things difficult. This is one of his most famous works, and demonstrates that he is not sentimentalising the topic, I think, though it’s clear he had an eye for the market (and the Royal Academy). Regatta Day, Penzance (c1890, below) shows a cheerier scene which captures both the period and the idiosyncrasies of the local population, but in these two paintings as in the others it’s clear that he is watching the local community as an outsider with privileged access, rather than as part of it, which is perhaps the lot of a painter, maintaining detachment and distance.

Other works, such as The Quarry Team (1894) are even stronger on social realism, depicting the toughness of life in Cornish industries, and rather gloomily, too. (This painting was slashed by suffragettes, incidentally, but despite careful looking there’s no sign of it! I’m interested to speculate whether this was random or if they chose this work for a particular reason).

painting outside, and also fishing, with other artists, etc, suggesting he was a jolly outdoors sort of chap of the type that the late nineteenth century bred so well (I’ve no idea if this is true, though). There are some more idyllic scenes among those on display: Chadding in Mounts Bay (1902) is a more cheerful, sentimentalised and more Edwardian scene (right), in which the sun shines, the sea is blue and the children are rosy-cheeked and cheerful(ish). Gala Day (1907) is slightly less so, because despite its emphasis on the local and the patriotic, there are figures on the fringes – an elderly woman straightening a child’s sleeve, women chatting and pointing – which makes the work feel real, almost photographic in composition if not in style.

Many of the paintings are linked to a specific location, and some of those have hardly changed – Mousehole Harbour (1910), for example, is still distinctly recognisable – but in many ways Forbes’ paintings preserve a moment in a world now lost. Times change, though, and in many ways his later paintings update these earlier idylls: the children of Relubbus Bridge (1930) are updated versions of the earlier cherubs that went chadding in Mount’s Bay. Yet there is change, in people, in dress and in subjects chosen; Forbes lived a long life and demonstrates his understanding of a changing way of life on the coast. The interwar years have less working men and more scenery, less sentiment and also less local colour in the form of festivals and ceremonies. 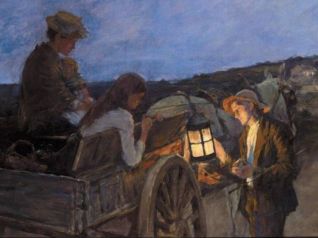 The colours of the paintings are often the colours of the sea; apart from some interiors, blues and greys (glas is the Cornish word for whatever colour the sea is) predominate, some muted and some vivid, but usually with a touch of brightness somewhere in the painting. The exhibition is carefully hung to emphasise this, I think; gallery 3 is darker, with many indoor or night paintings. The light effects in darkness here are masterly, seen in Lighting Up Time (1902), for example (left). The Steel Workers (1915) depicts a much more modern industry and seems uncharacteristic of his previous topics, though logically it’s another relevant industry to depict, and the painting demonstrates similar techniques with spots of light highlighting different parts of the painting. The Letter (1898, below) provides a major contrast, though: this is high Victorian melodrama, featuring dramatic lighting for a scene in which a presumably tragic letter has arrived, and the mother of the family opens it in the doorway watched by her family, the postman and, for full sentimental effect, the dog.

I’ve seen a lot of Stanhope Forbes’ work over the years, but this exhibition still managed to surprise me with the breadth and depth of his work; there is no substitute for seeing a wide range of an artist’s work on display together, and this demonstrated to me how much Forbes chose his subjects to suit his audience as well as his own style, and how well that style works in a coastal setting. The exhibition is set up to consider continuities in his work from the earlier to the final paintings rather than to examine his development as an artist, but it is, of course, possible to see both with careful attention.