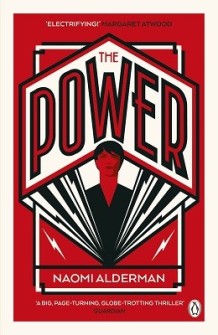 The Power is Naomi Alderman’s fourth novel, and it won the Bailey’s Prize for Women’s Fiction.  Science fiction novels don’t normally appeal to me, but the complex gender dynamics and dystopian vision of a gender-switched future sounded interesting, so I read it on holiday and found it a fascinating read. Firstly, it’s well-written, which is obviously what you’d expect from a Professor of Creative Writing; but more than that, it’s able to switch between subtle and tub-thumping, creating a web of complicated and unexpected threads of a speculative future. Other dystopias by feminist writers (Woman on the Edge of Time by Marge Piercey and The Passion of New Eve by Angela Carter spring to mind) are more of a blunt instrument, I think; The Power responds to some of the concerns of the twenty-first century in a way which is not fixed but shifts throughout the novel. Entertainingly, the novel is framed by letters from a (fictional) male author to ‘Naomi Alderman’ asking what she thinks of this novel which purports to tell a ‘new’ version of women’s rise to power; her advice, at the end, is that it’s hard to believe men were ever that strong, and that perhaps, to avoid being pigeonholed as ‘men’s literature’, he might consider using a female pseudonym.

Power corrupts. We are all increasingly aware of this, and politics, social and cultural structures,and everything that builds up most societies is based on patriarchal power,

the understanding from time immemorial that men are stronger physically and therefore men have the power; the threat of violence towards women, if not actually violence, underlies the patriarchy. What happens if women have a power which makes them more of a threat? At first, it’s a few teenage girls realising that they have a tingling sensation which becomes greater as they become angry (at men who attack them or their family): there is a direct correlation in the novel between the development of women’s power and their ill-treatment at the hands of men. These pubescent girls begin to realise they can do harm with this power, and from there it grows. The novel traces the development of this female power across the world, as women learn to fight back.

Like all good sci-fi, The Power gives a reason for this electricity (a liquid called Guardian Angel which was put in drinking water during WW2, and became part of the water cycle, intended to protect humans from gas attacks, but with an unintended consequence for women only), but the reason is almost irrelevant (though it does indicate the potential dangers of chemical alterations to the human body). The point is that young women develop a ‘skein’ across their collarbones which is the source of their electrical power which can maim or kill (or light candles, or tickle). Older women’s power can be ignited by younger women, and it becomes clear that ‘the power’ is metaphorical: in the early stages of the book, it seems a feminist trope, an indication of a much needed redress of the balance of power. The growth of female power is accompanied by the development

of other social structures, however: despite attempts by masculine powers to repress or control it, women slowly gain political power, in one case setting up a women-only state, or developing a matriarchal religion. These developments are told through the stories of particular figures in different situations across the world, and thrown into relief by the story of a young man, Tunde, whose videos of early electrical attacks go viral and make him a sought-after reporter. At first the women see him as on their side; later, as his fear grows, it becomes startlingly clear to the reader how the balance of power has shifted completely, with men in fear of their lives.

The three main female characters indicate the ways in which individual situations contribute to a global reversal of power, building up slowly until it is an unstoppable tide. Allie has escaped (and killed) her abusive foster-father when the power came upon her, and she reinvents herself as a female prophet, with her own religion of female power. Margot is an American mayor looking for ways to advance her career in a male-dominated, inhospitable political environment, and Roxy is the daughter of a London gangland leader whose mother is murdered in front of her. They

all have reasons for using power to their own ends, and at first it’s easy to sympathise when girls who have been victims of male power find their own strength and fight back. Quickly, though, it becomes extreme; and although little here has not been seen in the world before with the gender roles reversed – men are afraid to go out at night, men are considered to be dependent on women, men are inferior, etc – nonetheless it is shocking. And what is perhaps most shocking is the way that this approach explodes myths. Women have to be strong because they need to protect their children, the new argument goes; men aren’t really necessary. Men aren’t built for strength and speed, women are: the ultimate message of the novel is not that men and women are different, but that they are, ultimately, the same – they are corruptible. Power goes to women’s heads in the novel, just as men have been drunk on it for millennia, abusing and repressing women simply because they can.