Over the last year I keep coming across references to the Church of St Mary and St David at Kilpeck in Herefordshire, so I felt I was meant to visit it. It’s a fascinating place: built on an ancient site (and who knows what lies beneath the current building?), the church as it now stands is thought to have been built about 1140. It’s in an egg-shaped graveyard, because an old superstition indicates that this prevents the Devil from hiding in corners, and the area is likely to have been considered sacred due to its pure springs as well as other more obscure phenomena. You can read more about the church on its excellent and informative website, which also has an app (the app is basically an audio guide, which is a good idea but as we had children with us we didn’t get to use it!)

The church is Romanesque, the 10th century precursor to Gothic style, which as I understand means that churches described as Romanesque have a lot of arches and circular parts (apologies here to the more knowledgeable)! It’s also wonderfully carved, by craftsmen of the Hereford School, whose work appears all over the county and is remarkable for its vivid detail. The south door is wonderfully carved, with designs which look vaguely Celtic to me, including a (disputed) Green Man at the top of the right hand pillar, along with birds and foliage. The church is particularly famous for its 85 corbels (these are what I would have called gargoyles, but the technical difference, the guidebook tells me, is that gargoyles have a purely decorative purpose, while corbels actually support some part of the building). These include a famously rude sheela-na-gig, a female figure who may be intended to ward off evil spirits, or might be a Celtic fertility symbol, or indeed a warning to the lustful – but no doubt she is the most frequently photographed part of the building! 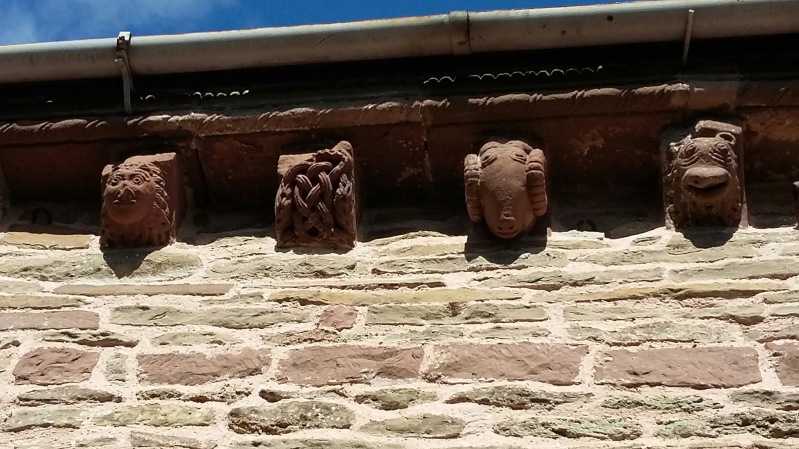 The church is also situated on in the ley lines identified by Alfred Watkins in his book The Old Straight Track, so Kilpeck has become a site for the curious, be they Christian, pagan or somewhere in between, because of the church’s reputation for being a site where differing approaches to the spiritual merge – in the building itself, at least. 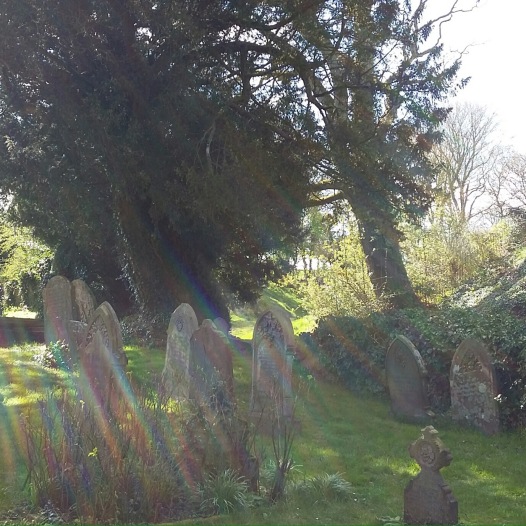 There is a castle behind the church, somewhat earlier (though by less than a century) than the church, which was probably once the administrative centre for the area. There is little of it left, but with the spectacular views of Herefordshire one can see that it was a perfect spot to defend an area. It was captured by the Parliamentarians during the Civil War and demolished, hence the very few remaining walls.