I first encountered Vanessa Bell’s work when I was a student at the Courtauld, where I saw A Conversation and Arum Lilies, and fell in love with them. In fact, I haven’t seen that much more of her work since, so went to Dulwich Picture Gallery‘s new exhibition of Bell’s work as soon as I could. Bell is primarily known today as part of the Bloomsbury group – sister to the more famous Virginia (Woolf), muse and lover to several men including Duncan Grant – and only incidentally a painter in her own right. Critics speculate that in fact history might have treated her more favourably had she not been associated with such a notorious group.

This exhibition contains only works by Bell, and the explicit aim is to refocus on her as an artist – and one who is deeply engaged with Continental art, who is ‘one of the leading artists of her day’, according to the exhibition notes, who has an irresistible ‘energy and forthrightness’ in her work as well as her life. The first room, ‘Among Friends’, does slightly undermine this concept, though, since the portraits are familiar Bloomsbury faces, including herself and Woolf, Lytton Strachey, Duncan Grant and others. However, I particularly appreciated The Red Dress, a Madonna-esque portrait of her mother based on a photograph by Julia Margaret Cameron and worked up in oils by Bell after her mother’s death. Lady Strachey is also appealing: a slightly grand but rather practical-looking woman, passionately feminist, unconventional and given to reciting poetry aloud. Bell’s portraits move sharply away from the conventions of Victorian portraiture, capturing their subjects in a way which does not rely on a realist depiction but rather uses unexpected colours and brushstrokes to draw out some deeper energy which she saw in them. In the portrait of Lytton Strachey we can see his spontenaity as well as hers; in the portrait of Woolf in an armchair we are conscious both of her inscrutability and also of the portrait as a depiction of the writer’s complex inner life.

The designs for the Omega Workshop which appear in the exhibition are full of life and colour, the clashing bold designs both of their time and timeless, which is also true of her still lifes; while Bell clearly knows and subtly references earlier still lifes with their flowers and fruit, hers are quite her own, though Iceland Poppies demonstrates what she learned from Sargent, but paintings such as Arum Lilies, with its slightly awkward angle and apparently haphazard positioning is appealing in a unique way because of its original approach to form and colour. I’ve always wondered how the vase remains upright.

While she noted that ‘one isn’t meant to paint what one thinks beautiful’, happily she was able to ignore such rigorous tastes, painting things that clearly are beautiful but in a way which creates her own view of such beauty. The Other Room, a painting intended as an overmantel, in

which we see out of a window across a room; the effect would have been cleverly to suggest that one was looking in a mirror, transforming the room in which the painting was hung, but also implying that there are hidden, other places we can glimpse through paintings, round corners, out of windows. Paintings such as this remind me that Bell’s art is all about art – about colour and form and design, about living it, about painting other artists. Everything she paints says something about her artistic theories and integrity – a conclusion I probably couldn’t have reached without this exhibition.

Other paintings indicate her awareness of Impressionism and other movements, from the Cubist portrait of Molly McCarthy to landscape paintings which reference Cezanne and Monet. I never really thought of Bell as a landscape painter, but the exhibition has corrected me in this, and points out that she loved to paint as she explored the countryside around her home. There are also many Continental landscapes, full of light and colour, capturing the spirit of place wonderfully and evocatively.

Her portraits of women, with which the exhibition closes, are amazing: the opening panel points out that her ‘portraits of women offer us bracing encounters with female subjects given startling new agency and force’. After all, this is a time when women were beginning to gain some power – the vote, for instance, and to have more possibilities for establishing themselves as artists, writers and intellectuals independently of the men in their lives. This is apparent in her portraits, yet she does not shy away from depicting alienated women in Studland Beach, and in her self-portrait she shows herself as a painter, yet with her face blurred, absenting herself from her own work. There is much to reflect on here, and though the arrangement of the works by theme rather than period can be obscuring of her development as an artist, it also offers an insight into the ideas that preoccupied her across her life, as well as indicating the breadth of styles and approaches, as well as subjects, she explored. I must add that the exhibition labels were extremely good – detailed and informative, which is all too rare these days, and the catalogue is a delight! 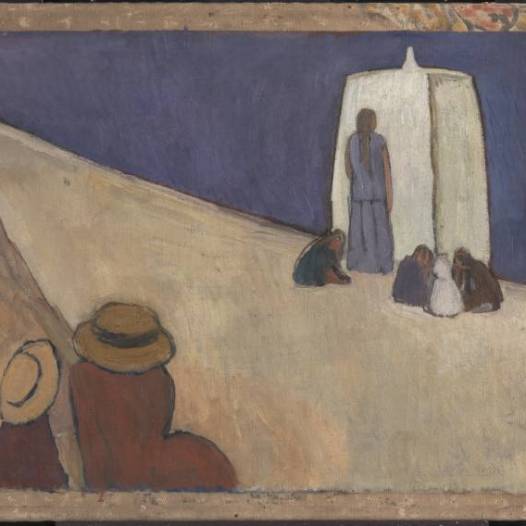 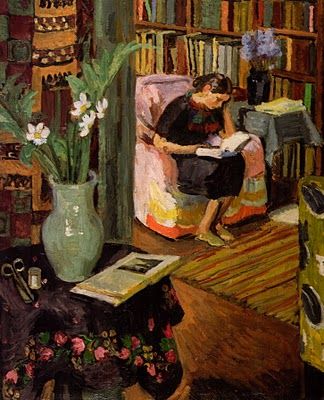