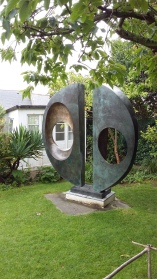 In St Ives on holiday, we visited Barbara Hepworth’s studio and garden, now part of Tate St Ives; Hepworth (1903-1975) died there in a fire about 40 years ago, and in her will asked that Trewyn Studio and gardens, complete with her sculptures and belongings, be opened to the public. Now, it is a tranquil place to visit, and one can imagine the haven it provided for Hepworth, who moved to St Ives in 1939 to escape London in the advent of war.  The move initiated a shift in the focus of her work, to natural forms inspired by the Cornish landscape she grew to love.  This is displayed to great effect with the sculptures in her garden, where a natural sense of form and movement blends with plants, trees and natural light, for which St Ives is remarkable.  Previously Trewyn had been a children’s home, but in 1949, ten years after her move to St Ives, Hepworth fell in love with it and bought it even though she couldn’t afford it, and the garden in particular became integral to her work.

From the dark entrance hall, paved with Delabole slate, which she used for many of her sculptures, and filled with photographs of Hepworth’s life, the visitor emerges into a light, bright studio space equipped with many examples of her work, including the famous stringed designs, sketches, and photographs of the space as it was during Hepworth’s lifetime.  It is also still furnished with pieces of furniture she acquired herself, which give it a homely touch.  Through the studio the garden can be reached, where sculptures are set among an array of plants and flowers, their organic shapes demonstrating Hepworth’s understanding of the holistic form and harmony with nature and landscape.  Winding paths lead around the garden, where one is assailed with the smell of the flowers and the sea, and the sight of nature and art entwined.  The garden is based on a formal layout, which is a relic of the Georgian estate of which it was once a part.

In the garden is a small, white-painted summerhouse, with a makeshift bed, where Hepworth used sometimes to sleep; there is also a large outdoor studio, consisting of several rooms not unlike a conservatory.  This makes the most of the St Ives light, and is airy and warm, housing a number of cacti, and sometimes a cat, which dozes in a shabby armchair in the sun.  There are also a number of unfinished works in the studio, which adds an unusual sense of immediacy, as though the artist may return at any moment.  Jars of coffee sit side-by-side with glue and varnish on the dusty shelves, and her tools are scattered about.  Hepworth used a number of assistants in her work, especially in later life when she became frail, but her own tools are clearly marked with red tape. While resting in the summerhouse, she could hear her assistants working, and would call out to them if they made a mistake, which she could tell by the sounds of the tools on the material.

Some of the sculptures are small and unassuming, almost hidden by the foliage in which they reside, while some are towering focal points that demand attention.  These are combined with beautiful flowers, and gnarled trees, which are works of art in themselves.  A small lily pond with a bridge completes the picture.  Somehow the holes in the forms of her sculptures seem to make more sense when trees, flowers and the sky can be seen through them, giving an appropriate sense of context to these smooth and natural forms.  While modern sculpture is not something that appeals to everyone, there is a strong sense here that searching for meaning is beside the point; it is feeling which is important, and the garden is an ideal environment for this.  Unlike a gallery, here you can walk around the sculptures, and give in to the irresistible urge to reach out and touch them.  By walking around and peering through the pieces, a visitor can become a part of the sculpture garden. Visiting with my son, I was fascinated by his enthusiasm for interacting with the sculptures, looking at them from all sides and even touching them.

Hepworth is well known for her exploration of form, especially the “pierced form”, which by means of a hole or depression in a solid mass allows exploration both of form or shape, and material. Like many of her contemporaries in abstract art, she believed in the concept of “truth to material”, where the artist works with rather than against the inherent qualities of the material.  Frequently she worked in wood, but in later life she moved on to bronze sculptures, and it is these and stone sculptures which form the majority of pieces in the garden.  Some are totem-like, giving a feeling of standing in an ancient, pagan landscape, while some are smaller and curved, with strings demonstrating tension in the landscape.  One such sculpture fills up with water when it rains, giving it a fourth dimen

sion which adds to the organic feeling of her work.

Although very much rooted in the Cornish landscape, her work was never insular, influenced by international movements in art and sculpture.  At art school in Leeds, she was a contemporary of Henry Moore, and had many friends and acquaintances in the international art scene.  It was after the birth of her triplets in 1934 that she moved to abstract art, and endeavoured to ‘infuse the formal perfection of geometry with the vital grace of nature’.  Her work reflected both her own emotions, and her feelings towards nature, examining seed forms and maternal instincts along with regeneration and regrowth.  This last was considered particularly significant in the post-war world.