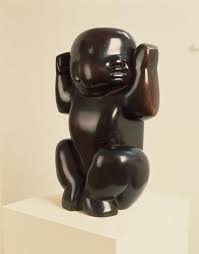 Barbara Hepworth’s work fascinates me. I want to stroke it, and take it home with me and stare at it (though I’m not sure how well it would sit in my Victorian house!) It’s appropriate that, forty years after her death, the Tate’s summer blockbuster should be devoted to her, and it does a good job of demonstrating the development and breadth of her work, along with appropriate and interesting context. Though I have seen several Hepworth exhibitions before, I appreciated seeing her early work – carvings, mostly small enough to feel intimate and domestic, of figures both human and animal – in the context of other artists’ work of the period, including Henry Moore, of course. These works, in wood, onyx, stone, demonstrate how Hepworth worked with – rather than against – the grain of the materials she chose, creating beautiful, simple, tactile works which one wants to touch (in fact, this is clearly an issue, given the number of warnings about alarms being triggered if you touch them!) ‘Infant’ (left) somehow seems to carry within it the very essence of babyhood, a tiny figure holding up its arms as babies do, while the green onyx toad, reflecting the fashion for small animals in hard stone, somehow seems so toad-like despite its simplicity and apparent lack of detail.

The Studio section provides photographs as well as work during the period she shared a studio with Ben Nicholson, and 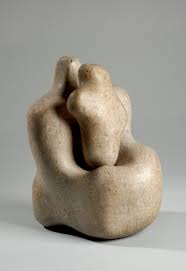 many of his works, too, which offer illumination on the period in which she was working as well as being interesting in their own right; his works on paper demonstrate an interesting echoing of form across their works. At a time when Hepworth wrote ‘we are building a new mythology’, she was creating her Mother and Child series, which abstracts the concept of a relationship between two bodies to demonstrate a kind of relationship in stone in which one appears to be cradling the other. These, too, are tactile, the flaws and grains in the material becoming part of the work of art.

The context of her working practices is extended in International Modernism, which not only indicates her position within a growing movement – and her importance in it – but also shows her her work developed, becoming more deeply abstract as she played with ideas of forms and how they relate to one another. There are single, monolithic forms, forms placed together and shadowing one another, and then increasingly complex

forms; looking at them makes form seem both simple and complex; we can peer through them, walk round them taking in unexpected angles and views, and interact with them; this is true of works such as ‘Forms in Echelon’ (left). It’s easy to look at pictures of them and think, What’s the point?’ but to see them is somehow to experience them – I can’t really explain it, except that there is a sort of magic about these works. The room entitled Equilibrium explores her growing interest in more complex forms and shapes, often using other materials such as she does in her famous stringed works. ‘Oval Sculpture’ may seem simple, from some angles, with its clear outline and shape, but the more one looks at it the more one is drawn in. By this stage in her career she was working in Cornwall, and much of her work expresses her sense of being enfolded by the landscape, becoming part of it, and this is very clearly represented here, though in a highly abstracted sense which draws on mathematical forms as much as a concept of nature and sense of place. 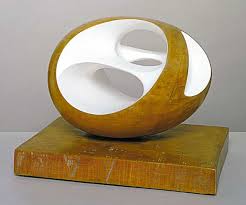 The closing rooms look at how her work has been displayed in architectural constructions, complementing and sitting alongside architecture rather than as an adjunct to them (something which can be seen to marvellous effect in the Hepworth Studio and Garden in St Ives). This sites her work in reconstructed structures, giving a sense of how she might have intended them to look. There is also a section on Guarea, a hard wood she used for some later works, explores the effects she achieved with this particular material. ‘Solid timber opened up to create an interior space’, she wrote, as though she could see the final sculpture in a piece of wood (which I don’t doubt she could). Guarea also gave her the chance to work with really large pieces of wood, creating

enormous wooden sculptures which again move her work into a new phase.

The exhibition indicates – without forcing – a trajectory in her work which makes sense of her work, with a narrative which is clear and helpful without being prescriptive. As I wandered round, I found myself thinking about form – in sculpture, in poetry, in the world – nature, society, everything – and that, to me, is what makes any exhibition particularly rewarding to visit: it provokes wider thinking, a broader conception of the world; and I left feeling uplifted and enriched.