On the way back from holiday, we stopped at Knightshayes, a National Trust-owned house which appeals to me in every way. It’s a wonderful example of Gothic Revival architecture,designed by William Burges. The house has a complex history of design which makes it particularly interesting: Burges was commissioned to design the house in 1869 by Sir John Heathcoat Amory, and completed the exterior by 1874. Burges, inspired by Pugin’s work and writing, and eccentric friend of the Pre-Raphaelites, was deeply immersed in the medieval aesthetic, which manifested itself in a European-influenced form of Gothic in his

buildings. (As you can see from the photographs, he was so medievalised he even had the costume). He was friends with Dante Gabriel Rossetti, who wrote of him:

Who from infancy scarcely emerges.

If you had not been told,

You would offer a bull’s eye to Burges. 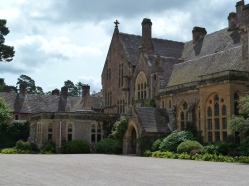 All this suggests that there was something unrestrained and perhaps difficult to work with about Burges, and certainly this seems to have been the case for the Heathcoat Amory family. Though the designs he made for the interior look marvellous to me, the high Victorian Gothic interiors were too much for the more conservative family, who consequently sacked Burges and brought in John Dibblee Crace,whose family worked with royalty (and on the Houses of Parliament) and were thus considered likely to be more respectable interior decorators. They were wrong; what Heathcoat Amory wanted was a solid, respectable, traditional house to establish himself as a country gentleman, and this fashionable, colourful (the less charitable migh 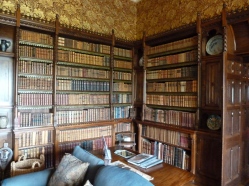 t say garish) form of décor didn’t suit. From 1889 onwards, the house was transformed as patterned ceilings were covered up, fireplaces and panelling removed, and so on. Luckily, nothing was thrown away, but it was mostly chucked carelessly into cellars and basements. Eventually, the process of restoration of Gothic design (re-Gothicising?) began, and late in the 20th century was completed.

The house has had an interesting history: it has remarkable 20th century gardens, as well as having housed a family descended from a factory owner (apparently an excellent employer) who, along with his descendants, shaped the area in which they lived. It also served as a military hospital in the First World War and a rest home for servicemen in the Second. But to visit it now,

with its remarkable woodcarvings, its quotations from Chaucer and inscriptions of different kinds, its stylised patterns on wallpaper and furnishings, it seems to echo William Morris’s home at Red House, built in 1860 by Philip Webb but with interiors by Morris and the Pre-Raphaelite Brotherhood, which is perhaps less Gothic but equally medieval and decorative, adhering to similar principals. 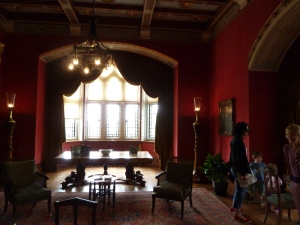