Gothic exhibition at the Library of Birmingham

Last week was the launch of Gothic, an exhibition of work by students at Birmingham City University. We’ve been working towards this for a while now and the exhibition, curated by Grace Williams, represents some of the fantastic work done by our students as well as offering a fascinating perspective on Gothic in the 21st century. Gothic is endlessly inspiring, it seems, and appears in our arts and culture in very different, unexpected ways, and this exhibition, which includes photography, painting and jewellery, reflects this and the ongoing relevance of Gothic as a cultural influence.

Last week saw the opening event of the exhibition, which was pleasingly well attended, and we ha

d the opportunity to enjoy readings of creative writing by School of English students Charlotte Newman, Bex Price and Abigail Cooper. The exhibition itself provides some excellent examples of the way in which artists can reinterpret or be inspired by Gothic themes. 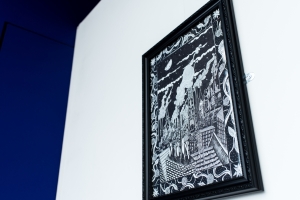 e isn’t space for me to comment on every work included, unfortunately, but it’s fair to say that the macabre and unsettling is a feature of most of the works included. There is jewellery which includes vintage stones, in a beautiful, unusual pendant by Jivan Astfalck, and Rachael Colley’s ‘Sovereign’, a ring set with sawdust and blood, a macabre echo of the hair mourning jewellery popular in the nineteenth century. More traditionally, Jodie Drinkwater’s ‘Something Wicked This Way Comes’ is a pen and ink drawing of a monstrous figure of a man on the rooftops of a Victorian city, indicating the fear of the unknown which can penetrate the familiar.The beautiful often contains the terrible, as Sevven Kucuk’s ‘Still Life with Apples 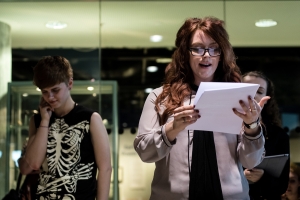 – but no Oranges’ indicates (the title referencing Cezanne); the image of the glowing fruit in an urn-like container recalls Renaissance memento mori, reminding us that decay is present in everything.

The historical echoes of Gothic in the nineteenth century are all around even in this new work. As Julian Wolfreys points out in Victorian Hauntings, the Victorian period is, culturally, what we picture when we think of Gothic:

‘…all that black, all that crepe, all that jet and swirling fog… These and other phenomena, such as the statuary found in cemeteries 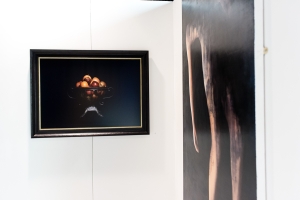 such as Highgate, are discernible as being fragments – manifestations of a haunting, and, equally, haunted, “Gothicized” sensibility.’

Grace Williams’ print ‘Escamotage’ references a nineteenth century ‘vanishing trick’ in which the female body appears to disappear from under a Persian rug, which both reveals and conceals the female form. Gothic, with its complex relationship to the position of women – historically both reinforcing the subjection of women and simultaneously offering them a freedom as ‘other’, as deviant from the norm – provides a context to the image which makes it all the more disturbing. Wendi Ann Titmus’s mixed media images ‘Intellectual Uncertainty’ similarly disconcert the viewer, blurring boundaries between innocence and the macabre, reality and fantasy, and even fear and humour.

These and many other exhibits are worth taking time over, considering how they relate to Gothic and also how they reflect the uncertainties we feel about the past as well as the anxieties of the present. Do go along to the Library of Birmingham and have a look at the exhibition, which is on the 3rd floor and runs until May 2nd.