Magna Carta: past, present and future 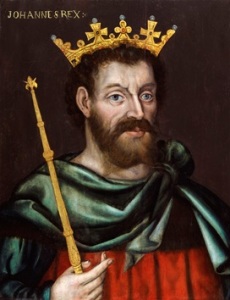 If you’re anything like me, you’ll be vaguely aware of Magna Carta and – in a vague way – that it is important as a historical document, and that it was written 800 years ago. I must admit I’d never given it much thought, though, so the British Library’s new exhibition, Magna Carta: Law, Liberty, Legacy, taught me a lot. On the first Sunday of the Easter holidays, it was packed and probably the slowest-moving exhibition I’ve ever visited (partly because you need to look closely and read every information panel), but it’s well worth spending time here. The exhibition shows documents from well before 1215 which were precursors to the Charter granted by King John at Runnymede, and it’s fascinating to have the opportunity to look at the tiny script and often rather scrappy documents of these hugely significant papers (I enjoyed mentally comparing them to official papers today, which seem rather boring). The documents are in Old English, Old French or Latin, as well as tiny writing, so it’s difficult to read much of them, but sections are translated in the panels so a good gist of them can be gained.

The exhibition unfolds a story, then, of ‘bad King John’ who needed to appease

rebel barons, and did so with this document which has been significant for British law ever since. (There is a translation of it here, if you’re interested). From servants to political freedom, the ‘ancient liberties and free customs’ of the city of London, to inheritance, debts and crimes, there are familiar phrases in the text and familiar ideas, too, even though most of its laws have now been repealed. The closing exhibits are two copies of the Charter, one severely damaged but they other preserved enough to read (if your eyesight’s good!)

across its 800-year history. For example, in 1915 in The Englishwoman, Helena Normanton argued that the disenfranchisement of women went against sections 39 and 40 of Magna Carta, presumably on the grounds that liberties were offered to all ‘freemen’, a term which might also include women. In 1934, it was again evoked in a cartoon entitled ‘Pageant of Liberty at Runnymede’, in which those who have fought for freedom appear to be upstaged by Oswald Mosley of the British Union of Fascists and his ‘Magnissima Carta’. (There’s a great article about Magna Carta in the twentieth century here).

Two of Rudyard Kipling’s poems were included as examples of the enduring legacy of Runnymede; KIpling, patriot and poet of Empire, was fascinated by the enshrinement of political freedom which Magna Carta represented, and in ‘The Reeds of Runnymede’ he reimagines the creation of the document and reminds his readers that these ideas remain important. Similarly, in ‘The Old Issue’, written on the outbreak of the Boer War in 1899, he emphasises the lessons of the past which are enshrined in these old laws, suggesting that the issues

at stake never change as human nature remains the same, and the struggle between the ruler and the ruled goes on – freedom must sometimes be regained.

Ancient Right unnoticed as the breath we draw—
Leave to live by no man’s leave, underneath the Law.

The exhibition describes Magna Carta as one of Britain’s greatest exports. From early American laws to the Bill of Rights, to providing

inspiration for human rights legislation in the twentieth century, its significance is huge and much further-reaching than I had imagined. And echoes of it go on and on: in 2008 Peter Brookes’ cartoon ‘Magna Carta, Mini Carta’ mocks the anti-terrorism act, for example. The document may not be the law it was, but it shaped the law we have, and, more than that, it has become a symbol of British freedoms, of rebellion against excessive rule, and of the power of the people.