The pantomime is considered a great British tradition, a concept I find both fascinating and slightly mystifying. This year we took my small son to the pantomime for the first time, and in my first visit to the pantomime for about thirty years I was struck by how little has really changed. Going to the pantomime was a much-anticipated Christmas treat for me as a child: I wholeheartedly believed in the magic of the pantomime, found the jokes hilarious, the mock-pathos moving, the action thrilling, and I desperately wanted to be the fairy godmother (usually played by one of the senior girls from the ballet school). Subsequent weeks would be spent re-enacting parts of the pantomime, with focus on the ballet.

The pantomime we went to was in the same place (The Elgiva in Chesham, if you’re interested) as the pantomimes I attended in the early 1980s, which made me think even more about how things have changed over time. The pantomime tradition demands that the basic story be that of a fairytale (Jack and the Beanstalk, in this case), but which must include a hero, a princess, a fairy godmother, Widow Twanky (a man dressed up as a woman), a villain who must be boo-ed, and a set pattern of events, beginning with trials to be overcome and ending with a marriage. Along the way, the audience can sing, express loudly their delight or disapproval, and leave their usual, restrained selves at the door (this goes for adults more than children, of course). The set is always full of glitter and sparkle, the brighter the better – any ideas of restraint or taste must necessarily be replaced with a fearless drive towards a complete cheerfulness overload.

A new book on The Golden Age of Pantomime by Jeffrey Richards, which I’ve read several reviews of recently, explores why pantomime was so important in the nineteenth century, and one aspect of the Victorian pantomime is the way in which it constructed childhood as something innocent and ethereal, though later in the century combined with music-halls acts which attracted the crowds over Christmas. This combination is perhaps why the modern pantomime has a patchwork effect, in which songs, romantic interludes, jokes and audience participation all combine with both pathos and slapstick to create something unlike anything else you might see in the theatre. It won’t surprise you to hear that Charles Dickens was fond of a pantomime, though perhaps it is more surprising that John Ruskin also did.

In some ways, I found myself thinking how different this pantomime was from those I remembered – the music is 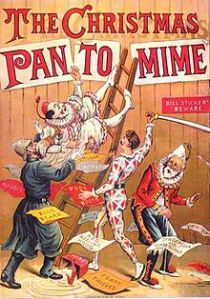 louder and more contemporary, the special effects more special, and the dancing more modern. Yet of course these are minor, surface differences: though the performance was well-rehearsed and performed, there was still a sense of very British amateurishness about it which is necessary in pantomime, I think. And though I was conscious of the innuendo in some of the terrible jokes, that’s because I’m older, not because panto has changed. Pantomime is by its very nature both timeless and of its time: different every year, only put on for a fleeting festive season, it reflects the trends and concerns of its time (for example, references to Strictly, Frozen and austerity abound) – but the way in which it makes contemporary references don’t really change, and the sort of awful, punning jokes which raise a groan are both rooted in contemporary ideas and in much older concepts. Making us laugh is a complex business, but one which in many ways doesn’t seem to have changed much over time. I’m no expert (though the V&A pages on the history of pantomime are very helpful) but it seems to me that at this festive time of year, a panto, full of cringe-making jokes, loud music with the occasional off-note, and clunky plots, is just what we need to raise the Christmas spirit.