I’ve been a bit obsessed with Paddington for as long as I can remember, and I still think Michael Bond’s original books are some of the funniest books ever written. The night before my viva for my Ph.D., I read one of my favourites, in which Paddington gets stuck in a box camera and careers into a flower-bed, and felt much more cheerful. There is something about the literal and slightly daft approach of this endearing bear which I found irresistible as a child and as an adult (and, incidentally, my small son in his wellington boots with his surprising questions rather reminds me of Paddington). The books were some of the first that made me feel that just to read a book wasn’t enough; I somehow had to live it (a feeling which got me into all kinds of ‘situations’ as a child, especially once I wanted to be a part of the Just William books). Now, I knew that when I went to see the new Paddington film, I would have to try to mentally suspend my history with Paddington and see the film as something separate, and I sort-of managed this. We took my son (who, Paddington-like, was too small for the fold-down seats in the cinema, which promptly flipped up with him inside), and he seemed to enjoy it – at any rate, he sat still throughout, possibly helped by the mountain of snacks he ate. 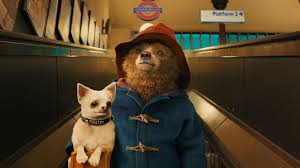 I was more ambivalent about the film. It’s always difficult, watching a film of a book you love and know well; in fact, much of the plot of the film bore little relation to the books, and seemed closer to the film of The Golden Compass, since Nicole Kidman plays a villain in both. In this film, she wants to have Paddington stuffed and displayed in the Natural History Museum, and much of the film is taken up with this plot, which seems far too out-of-the-ordinary for Paddington, whose adventures usually involved getting lost, getting tied up in string, DIY disasters or other well-meaning but doomed attempts to be useful. The plot was fairly well-put-together, with Kidman playing the daughter of an explorer who had met Paddington’s Aunt Lucy and Uncle Pastuzo (and taught them to speak English, which nicely explains the Anglophone bear); but the explorer was too humane to catch and kill one of the bears and consequently his career was ruined, hence his daughter’s desire to catch Paddington. The opening scenes in which we learn a little of Paddington’s history, and his family’s wish that he go to London where everyone was friendly (practising the many ways the British have of saying ‘it’s raining’) were entertaining, and the Brown family were likeable (if surprisingly well-off, given the house they lived in). But for most of the film, I was trying to push aside the thought that this wasn’t my Paddington; he didn’t even look quite right to me, and some of the things he did just didn’t seem quite appropriate. However, I can see that perhaps for today’s audiences the more restrained antics of Bond’s bear (bailing out bathwater with his hat, for example, rather than flooding the bathroom and sailing down the stairs in the bath) might have seemed rather tame; and there are many genuinely funny moments in the film. My favourite of these was when Paddington, having run away from the Browns, shares a sandwich with a guard at Buckingham Palace – and it turns out he isn’t the only one who keeps things under his hat; the guard has a thermos under there.

Despite my reservations, it’s a nice, cosy film, which also manages to have a subtext about being welcoming to strangers, being inclusive and understanding, and the value of a warm heart. Much has been made in reviews of the film about the concept of Paddington as a migrant, a refugee looking for a better place to live and for new friends, and the welcoming, middle-class Brown family, seemingly dressed in Boden, chaotic, tea-drinking and generally cheerful, seem the archetypal Best of British, a central concept which I quite liked but also found a little overdone at times. Still, it made me smile, and reminded me to return to the books I loved, this time with my son, and I hope it will do the same for others who see it.