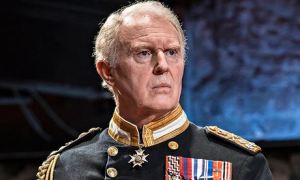 hink about the accession to the throne of the Prince of Wales, what do you imagine? A very different monarchy to that of his mother, I expect,  and one about which public opinion will differ, but unlike playwright Mike Bartlett, it’s unlikely you’d picture Charles challenging the constitutional roles of state and monarch before he’d even been crowned. It’s a somewhat implausible idea, but that really doesn’t matter; King Charles III uses a semi-Shakespearean plot to explore the role of monarchy and Parliament in the UK, as well as politics, the press, and our attitudes towards our current royal family. There’s also a good helping of identity crisis, and all this is done through the medium of a history play which is definitely ‘after Shakespeare’.

The play opens with a beautiful requiem for Elizabeth II, followed by the appearance of the heir, Charles (Tim Piggott-Smith), and his wife Camilla. It quickly becomes apparent that Charles has mixed feelings about inheriting the throne at this late stage in his life, and his principled uncertainty is contrasted with the likeable, media-friendly William and Kate, and the scampish Harry. In fact, all the royal family are portrayed as relatable, sympathetic characters placed in often untenable situations where they want to do their best for their country but are bound by law, public opinion, the press, and their own backgrounds. 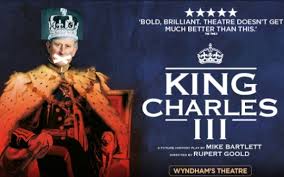 the press. Though he accepts that the press will rarely justify any faith placed in them, he sees it as a matter of principle that the government should not be able to decide what is and is not acceptable for publication, and refuses to sign. What ensues is a battle of wills, and law, between Charles and the politicians. These latter (from the two main political parties) are shown as weasel-like, with flexible principles and full of double-speak, while Charles himself becomes a King Lear figure, confused, miserable, attempting to do the best he can but beset with doubts and surrounded by enemies.

In fact, the play is suffused with echoes of Shakespeare; it’s written in blank verse, which makes it sound Shakespearean (whilst retaining a modern sense of language with contemporary references etc), and often it seems to stop just short of using Shakespearean phrases. I was almost expecting to hear ‘How sharper than a serpent’s tooth it is to have a thankless child’ at one point, and Kate does say ‘Nothing will come of nothing’ at one point (or something like it). There is certainly a feeling of ‘uneasy lies the head that wears the crown’, and some of the humorous moments of the play 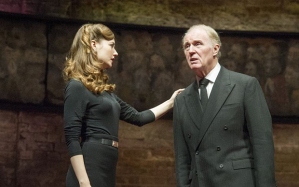 come from Diana’s ghost stalking the ramparts. There are even moments when Kate – a feminist princess who requires equal recognition with William – seems to be leaning towards the character of Lady Macbeth. In fact, Kate is a realist, who understands the media, the public and the modern requirements of the monarchy better than Charles or William; she also slyly alludes to Hilary Mantel’s comments by referring to herself as a ‘plastic doll’, and she plays the part of queen long before she gets there.

Harry, meanwhile, is a tragi-comic figure not unlike the Fool in Lear: sometimes he speaks the truth unwittingly, and injects moments of slightly uncomfortable humour, but he is also concerned with his own purpose and identity. He meets Jess, a republican art student from St Martin’s, and goes on a spree of learning not unlike Pulp’s Common People, learning about supermarkets and takeaways. The plot relies on this to a certain extent, since the press publishes some unsavoury pictures of Jess, Harry’s girlfriend, which under the new laws might have been suppressed, so the refusal of Charles to sign becomes doubly potent within his family.

The play asks some big questions, about the (un)constitutional relationship between crown and state, about what we want or expect from a monarchy, and about the freedom of the press. It also emphasises the psychological and philosophical difficulties of those brought up to inherit a throne. There aren’t answers, and the ending is uncomfortable and thought-provoking – making audiences wonder if what the public wants is always the right thing. However, don’t think this is a humourless play; it’s full of knowing quips, contemporary allusions, puns, jokes and moments of laughter. The actors are so convincing that they don’t even need to resemble their real-life counterparts; avoiding caricature, they play them with conviction. I don’t often get to the theatre these days, so when I do I want to see something I really enjoy. King Charles III  definitely qualified as something I enjoyed. It’s thought-provoking, well-written and performed, so I’d definitely recommend it. I was encouraged to see it by some really interesting reviews (such as this one).