A sanctuary from the trenches 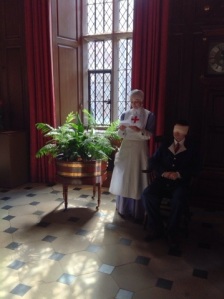 On Easter Saturday we went to Dunham Massey, a National Trust property, which has been transformed into the Stamford Military Hospital for 2014-15. The Georgian house had been decorated in the best Edwardian taste early in the twentieth century, but was offered by the widowed Lady Stamford as a military hospital in the Great War. As the capacity for nursing wounded soldiers coming home from the Front was stretched further and further, more and more country houses were taken over as auxiliary hospitals, including Dunham Massey in 1917 until 1919. In total, 3244 auxiliary hospitals were created, and 282 soldiers had been treated at Stamford.
Dunham Massey is a huge property, one of the largest I’ve visited, and this year it is all devoted to showcasing the house as it would have been in 1917. This seems to be the National Trust’s flagship WW1 exhibition, advertised everywhere and heavily promoted, which is clearly working judging by the queues over E 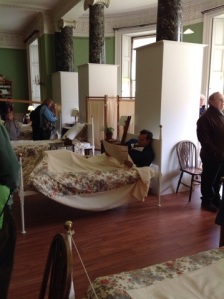 aster. It’s well worth it, though; people will obviously relate it to the similar (though fictional) events at Downton Abbey, where the house and its staff were taken over by a military hospital, and we see something similar here: house staff as well as the family (Lady Stamford and her daughter, Lady Jane Grey) worked in the hospital, and certainly for Lady Jane it was a positive experience that offered her something practical to do at which she excelled. The BBC’s current drama The Crimson Field may also have stimulated interest in the nursing care provided during the war, and Dunham Massey’s exhibition offers quite a lot of information about nursing.

Visitors walk through wards, finding out about individual patients based on the hospital records, which is fascinating. There are also a few patients and nurses around, played by actors, who do little sketches which are also rather reminiscent of Downton Abbey, but which do bring the scenes to life. The operating theatre at the base of the staircase has also been recreated, along with a few of the instruments on display. The wards have been reconstructed from old photographs, with flowered coverlets and little lamps beside each bed, and it does seem a peaceful place to recover 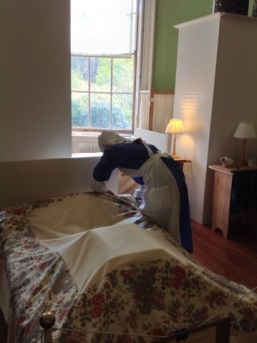 , though the exhibition notes are careful to point out the hell from which the patients have come, and the terrible injuries and traumas they brought with them. In fact the stories we are told of some of the soldiers are fascinating and indicative of the common tragedies of the war: we hear of injuries from which soldiers later died, as well as those soldiers who recovered well; one of these married one of the housemaids working in the hospital, while others were sent back to the Front and were killed.

Through the sketches and the information panels we get a sense of how the soldiers struggled to accommodate their injuries, and to come to terms with the experiences they had been through. We also get a sense of the futility of it all: how the efforts of the hospitals and nurses to help their patients recover was, particularly later in the war as military desperation grew, simply for the soldiers to be sent out to the Front again, continuing to feed the war machine. The hospital was only for ordinary soldiers – Tommies, not officers – who would have been overawed by the house’s size and beauty, but good use was made of the space; the nurses’ station and the patients’ common room are also set up for visitors, with a wealth of information available. The large grounds, which offered plenty of the popular ‘fresh air cure’, must have provided a remarkable 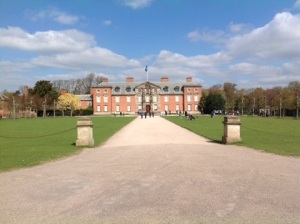 tranquility for the soldiers.

The rest of the house, which was used as the family’s private quarters, is also open to the public, and contains some opulence and luxury which contrasts strikingly with the hospital downstairs. During the War, many of the precious items of the house were stored in the Great Gallery, and there, stacked up and shrouded in sheets, many of them are now. There is also a remarkable collection of Georgian silver. There are also a few housemaids knitting around the house and kitchens.
The exhibition is very well done, though it’s difficult to take it all in when it’s quite so busy, but it’s an immersive experience that was bound to be popular. Strangely, one of the things I found most evocative was that the wards smelt of surgical spirit, as though the care of the patients was still going on. I took an enormous number of photographs (with permission!) and attach a few here. 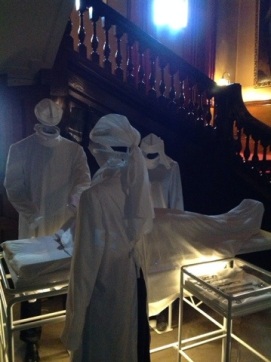 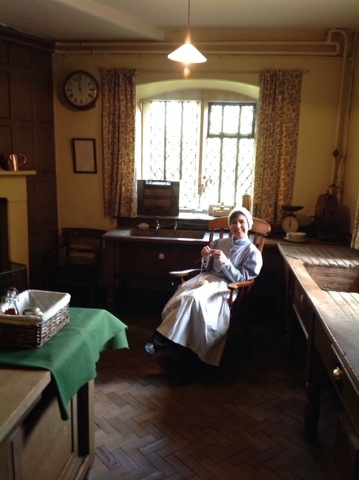