Recently I read a review in the TLS of books on urban exploring, and I seem to keep coming across the idea that places which are decaying are significant and fascinating to us. I’ve also seen a lot of images on the web of deserted buildings which both preserve a moment in time and also represent the destruction of time – such as this deserted apartment. Sometimes a range of ideas come together and make us think about how they intersect, and this is what Tate Britain’s exhibition Ruin Lust does. Apparently the idea came from Rose Macaulay’s 1953 book The Pleasure of Ruins (sadly now out of print). The exhibition notes tell me that the term comes from the German ruinenlust, and though the concept of a lust for ruins is appealing, encapsulating decay and destruction along with a somewhat seedy, voyeuristic interest, a recent discussion with curator Brian Dillon on Radio 3 pointed out that in fact the word ‘lust’ translates as a rather more jolly, less perverted, enthusiasm.
So a lust for ruins suggests an interest in the melancholy aspect of faded grandeur, with an element of hubris in their building (‘Look on my works, ye mighty…’) and a pleasantly self-indulgent desire for the relics of the past. That’s just for starters, of course; our ruin-lust, extant since the eighteenth century at least, tells a lot about past and present civilisations, and the exhibition 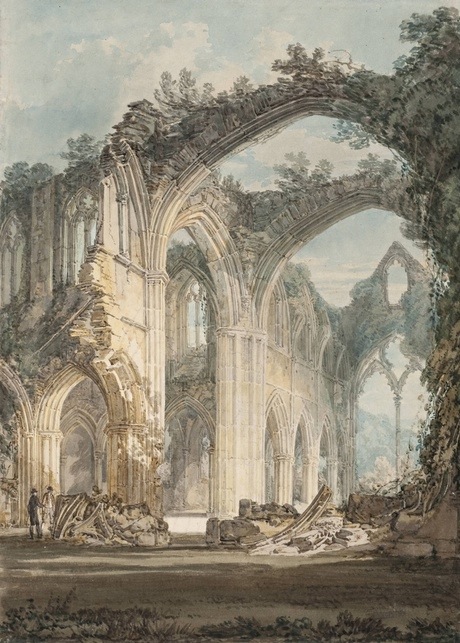 illuminates these tendencies. It’s organised around ideas associated with ruin lust – On Land, Pleasure of Ruins, Cities in Dust etc – rather than displaying artworks simply chronologically, and this works well on the whole. We start with John Martin’s apocalyptic ‘Destruction of Pompeii and Herculaneum’, which is followed by Jane and Louise Wilson’s ‘Azeville’, a complete contrast in subject and style yet somehow complementary in form. As the exhibition progresses, the reasons behind ruination are explored as well as their aesthetics. From natural disasters to war, it’s not only the passing of time and human neglect which causes ruins.
There is, of course, something rather Gothic about ruins. A building that is ruined demonstrates the distant presence of humans, who have since abandoned it, and only echoes of the past remain, echoes which are far more resonant for the decay of the building. But we are attuned to these echoes, and relish them. Tintern Abbey, inspiration for Wordsworth and Turner, among others, is a perfect example of this: it is possibly more awe-inspiring, more appealing, when deserted and ruined than it was when whole. These pictures displayed here suggest a form of preservation of what is already ruined: a work of art offers us a snapshot of the building at a particular stage of decline, preserved forever in an image.
Ruin, of course, is intrinsic to everything: ruin is hidden in apparently whole things, waiting to appear. This is evident in Joseph Gandy’s watercolour of the Bank of England, commissioned by Sir John Soane in the year the building was completed. Soane requested that this new building be painted as Gandy imagined it’s future ruin, and, naturally, this ruin is beautiful. Not every image here is aesthetically pleasing, though all are thought-provoking; some, such as David Shrigley’s ‘Leisure Centre’, are all too familiar – ugly, modern building abandoned for prosaic, disappointing reasons such as the council running out of money. These, then, are our modern tragedies, less dramatic than the eruption of Vesuvius and less picturesque than the passing of centuries, but a tragedy for the community all the same. Yet

we idealise older ruins, which embody something of history, of the picturesque, and what we have learned to think of as beauty, and are less enthralled by more modern ruins (usually not thinking of them as ruins in the same way at all). Perhaps it is historical distance as well as a kind of voyeurism and sense of human drama which causes our interest in them, ideas which Rose Macaulay understood:

Ruin is always over-stated; it is part of the ruin-drama staged perpetually in the human imagination, half of whose desire is to build up, while the other half smashes and levels to the earth.

There is a very interesting discussion of Macaulay’s writing about ruins here.