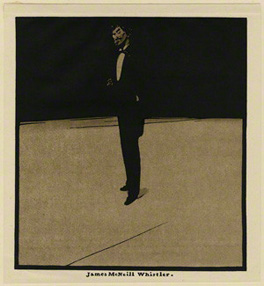 The National Portrait Gallery has a case devoted to William Nicholson in room 29. William Nicholson: Radical Woodcuts offers just three examples of Nicholson’s work, but is sufficient to prompt an interest in me as these examples are fascinating. Nicholson later became a well-known portrait painter, as well as author and illustrator of children’s books, but these images, of Whistler, Queen Victoria and Sarah Bernhardt, show a radical ability with simplicity of line and dramatic use of monochromatic contrasts.

The three images were originally published in 1899 in an edition of lithographs by William Heinemann. They are worth a closer look for the remarkable way in which a woodcut can capture character: there is something striking, almost caricatural about the demeanour and expression of the three figures which has become a part of their iconic status.

Queen Victoria is perhaps not treated kindly here – she is certainly not regal in this image, but more of a matronly, elderly housewife, with an unfriendly expression. Bernhardt has fared better: she is a grande dame here, more regal than the queen herself. Whistler is utterly supercilious, standing well back as if to look down his nose disdainfully at the viewer. In fact Whistler was a friend of Nicholson’s, encouraging him to pursue his painting. 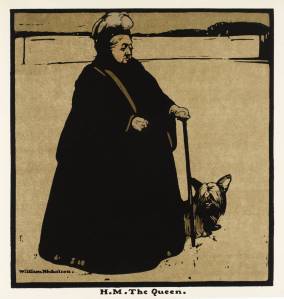 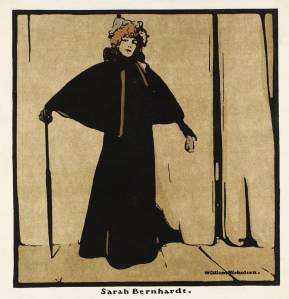