Pre-Raphaelite Poetry in the Snow

Last Saturday I went, along with some intrepid members of the Pre-Raphaelite Society, to hear poet Sarah Doyle, the PRS’s poet-in-residence, read her poems inspired by Pre-Raphaelite painters. As you will know if you have ever attended one, poetry readings can be quite intense events, and also very exciting. Even if you already know a poem, hearing it read aloud can be a very different experience (I mean this in a good way, although under some circumstances it can also be an excruciating experience!) This was, I’m pleased to say, a very good experience indeed. Sarah is an excellent and experienced reader of her poems, as is her husband Allen Ashley, who also read.
This was, for me at least, a very special event, as I spend so much time researching and writing that I find it very exciting to see that there are other, creative ways of responding to art and literature. Sarah’s poems respond in very different ways to Pre-Raphaelitism, not only to paintings but also to poetry and the lives of the artists. She began with ‘Reflections of Ophelia’, with which she won the inaugural PRS Poetry prize, and which I still find a remarkable poem (and you can read it at the bottom of this page). Sarah went on to read other poems, some of which had been commissioned by the PRS (you can read more of them here), and others which belong to a collection of poems inspired by the paintings of Waterhouse.
What I find so engaging about Sarah’s poetry is that what she is offering in these poems is a genuine reaction to the paintings, some which seem spontaneous and others which have probably developed after careful reflection. Sarah talked about the research that she does for her poetry, and also the way in which she looks for an ‘angle’ to write about. The result is a surprising range of poems, 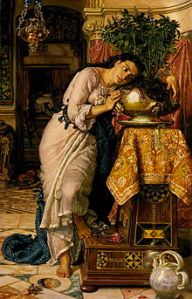 encompassing different poetic forms, styles, voices and concepts. Some are funny, such as ‘The Ballad of Echo and Narcissus’, a traditional rollicking ballad which retells the story of the myth with delightful rhyming humour; some are sadder, such as ‘John Ruskin: Body and Soul’. And some are shaped like pots, such as the concrete poem ‘Isabella: A Bitter Harvest’.
In response to the big Pre-Raphaelite exhibition last year, Sarah wrote ‘On Seeing Rossetti’s Self-Portrait, Tate Britain, October 2012’. This offers her personal reaction to the portraits, particularly of Rossetti, which appeared near the beginning of the exhibition. There is something very intimate about this poem, which communicates the spell that a painting can cast, and the connection that can be formed whilst one looks at an image, a concept familiar to all art lovers. The poem contains the line ‘the viewer and the viewed’, offering us the idea that, for once, we may look at Rossetti, just as he looked at his models. Poetry offers us the chance to see things differently, more clearly, then, even if sometimes that means back-to-front. The poems we heard on Saturday (not literally in the snow, by the way – we were in the Cathedral) encouraged me to look at very familiar works differently, and to think again about what I thought I knew.

Reflections of Ophelia
I’m drawn towards the water’s edge
as one who teeters on a ledge,
regarding on the water’s skin

my strange, distorted, rippled twin
who, beckoning to me, bids me Come in.
I falter at the reedy lip,
persuaded, yet afraid to slip.
And so, to slip, perchance to drown –
to cast aside my weed-spun crown
and let the water’s fingers bear me down.
Entwined within my hands, like jewels,
dear Columbine, the bloom for fools,
like bitter-yellow buttered Sun,
makes sport of mornings fresh begun –
though new-born days before me?  I have none.
For I was foolish, as a child
who, wide-eyed, finds herself beguiled
by clownish jests, but can’t discern
the wise man’s words from jester’s turn,
and such a fool as I will never learn.
For flatterers, a fennel stalk,
a silver stem for golden talk,
whose cruel and pungent spikes will weave
a heady spell of make-believe,
its base intention solely to deceive.
Yes, I was prey to flattery,
a victim of my vanity,
believing every honeyed word
he spoke, no matter how absurd;
I swallowed all and never once demurred.
My daisies, white for innocence,
pale, fragile, pink-tipped recompense
for injuries that I have borne,
for purity, their petals torn
and, one by one, replaced with vicious thorn.
My reputation robbed from me,
in payment for naivety.
My value as a daughter, nil,
and even if I had the will,
a flower, once it’s plucked, won’t flower still.
For thought, behold the pansy’s face;
it ponders on my fall from grace
and, nodding like a judging sage,
finds no excuse in tender age,
and thinks that I deserve my actions’ wage.
I must confess, I had no thought
that I’d be, like a minnow, caught
within a filigree of lies,
a plaything, dangled like a prize
by one whose thoughts wore layers of disguise.
Remembrance? Here is Rosemary,
in faint hope that my memory
remains an icon, true and strong,
a symbol lasting ever-long
of one who, wronged against, still did no wrong.
Though I remember, sharp and clear,
the vows of those that I held dear,
who promised me they’d keep me well
and vowed they would ensure I’d dwell,
cocooned, within a safe, protective shell.
My poppies, red with blackened eyes,
foretell my imminent demise.
Their paper petals represent
fragility, a brief lament
for life, though few in years, now fully spent.
For what is death but welcome sleep,
descent into the unknown deep?
Release at last from earthly pain,
a freedom from life’s bitter bane,
no consciousness or feeling to remain.
The chill meniscus bears my weight
but briefly, and I contemplate
that human life is but a loan,
an interlude, a meadow sown
with flowers that, cut down, can’t be re-grown.
Relinquishing my lifeblood’s hold,
submitting to seductive cold,
my life’s bouquet in death now wreathed,
like petals on the breeze, bequeathed
then gone; as though I’d never lived, nor breathed.