Last week I attended a conference on ‘Victorian Other Worlds’ at King’s College London (where I did my undergraduate degree). Annoyingly, I couldn’t stay all day, so was only there for the first keynote and the first panel (where I gave a paper on Christina Rossetti’s Sing-Song). The keynote lecture was on ‘Pre-Raphaelite Other Worlds’, by Dr John Holmes of the University of Reading, and I found it very thought-provoking. He began with a quotation from Ruskin’s The Art of England, which moves Pre-Raphaelitism from realism into other worlds. His premise was that realism, or ‘truth’, in the work of the Pre-Raphaelites is created in ‘other worlds’, as I will briefly explain.

John began by looking at Holman Hunt, whose travels in Palestine and related paintings seem to give him access to a specific ‘truth’: Hunt is known for being obsessed with a reality in representing nature, geology, human figures, botany, history, architectural details, etc. His serious research combined with his desire for authenticity in his work  provides his paintings with what John terms an ‘imaginative transformation’: accuracy may be at a premium, but so too is symbolism and artistic integrity. Through a trajectory of Hunt’s paintings, beginning with ‘The Scapegoat’, it was suggested that Hunt takes the viewer of his paintings into another world, one which is remote and exotic, but actually exists. However, these Eastern paintings, from ‘The Shadow of Death’ to ‘The 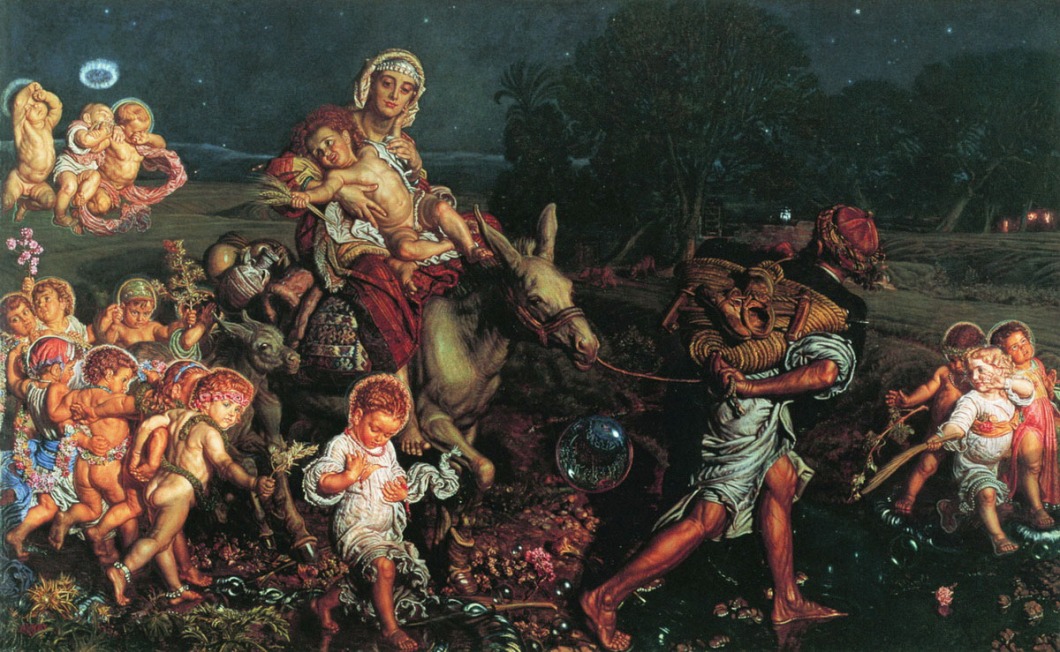 Scapegoat’ to  ‘The Triumph of the Innocents’ (described as ‘repulsive’!) not only display truth to nature, they also show another, higher truth: Hunt’s faith means that they are also true in a Christian sense. Such paintings require a viewer’s imaginative and spiritual engagement and an understanding of typological symbolism in order to fully enter into Hunt’s ‘other world’.

Next was the ‘other world’ of Dante Gabriel Rossetti’s medieval poems. John discussed ballads with the same premise, that of the wronged and fallen woman: ‘The Bride’s Prelude’, ‘Stratton Water’, ‘Sister Helen’, ‘Rose Mary’ and ‘Eden Bower’. In the first two of these, the family of the betrayed woman uses violence to re-establish the social order, and the women and their situations are carefully described with a psychological realism which acts upon th

e reader. However, the medieval setting of the poems permits a social critique which was relevant in the nineteenth century, but, by appearing removed from its time by the historical setting, was outspoken in a way which a contemporary poem might not be. The second two poems have a similar premise, but here the supernatural is involved: in ‘Sister Helen’, for example, the destruction of the social code is represented in the violent end of an individual. Finally, in ‘Eden Bower’, the Fall in Eden is rewritten, depicting the seduction of the snake by Lilith, who takes its form and becomes responsible for the Fall. Again, the poem is in a medieval style which provides the necessary distance to place it in another world and yet also subtly critique moral codes of the nineteenth century.

Lastly, we looked at Burne-Jones’s other worlds, which in many ways appear to be purely aesthetic (for example, ‘Vesper’). These other worlds of Burne-Jones are biblical, Arthurian or mythological, yet they also represent stillness and melancholy and beauty,

more interested in form than in action. As the wonderful cartoons by Burne-Jones (right) suggest, entering another world through painting isn’t possible; one simply ends up on the other side, disgruntled. John suggests that for Burne-Jones, then, other worlds don’t offer escape, but rather respite: a moment of calm and beauty: what he finds in his painting is what is absent in the ‘real’ world: tranquility – what Ezra Pound calls ‘The fourth: the dimension of stillness’.