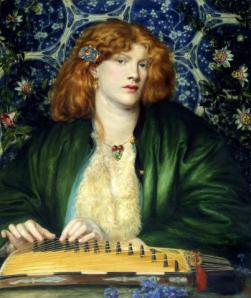 The long-awaited Pre-Raphaelite exhibition at Tate Britain has been open nearly a week, and it’s very busy. People are clearly flocking to see it, and the newspapers and the internet are buzzing with views, reviews and comments. Turns out quite a lot of people don’t much like the Pre-Raphaelites, but I don’t suppose that will affect the numbers of visitors to this blockbuster show. And some of the negative reviews have been a delight: Waldemar Januszczak in the Sunday Times calls the PRB ‘demented wife-swappers’ (ok, fair enough) who are ‘bonkers’ (yes, at least some of them) whose paintings centre on ‘ridiculous plot lines’ (true, but then that’s mostly to do with their literary roots, and applies to most Victorians anyway). Obviously, I am interested in/really like the Pre-Raphaelites, so I don’t need convincing of their artistic merit. From that point of view, this exhibition can’t fail, for me and so many of my friends and colleagues, because it is simply the biggest Pre-Raphaelite exhibition we’ve ever been to (I think I did go to the 1984 one, but was too young to remember it). For anyone with an interest in Pre-Raphaelitism, this exhibition is as unmissable as you would expect it to be – it contains many (although not all) of the major works of Pre-Raphaelite art; and a huge range of paintings and drawings are included, alongside sculpture, photography and furniture. This exhibition specifically set out to be inclusive in the way that earlier exhibitions were not, covering a range of media as well as drawing on more women artists, for example, and overall in this it is fairly successful.

Like some other reviewers, I do have a few issues with the arrangement of the exhibition. Little is made of the ‘av 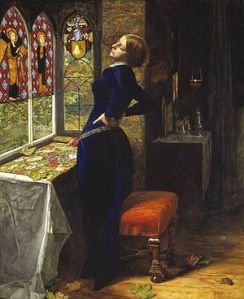 ant-garde’ label: although the introductory blurb says that the PRB were ‘both historical and contemporary in their approach’, it fails to elaborate on how their work was ‘essentially modern’, and I remain unconvinced (although it looks like the catalogue provides more detail). There is very little background on the Brotherhood, although there are some portraits in the first room, and little on how they came together or what they believed. The biggest issue for me, though, is the thematic arrangement of the works: the themes (Origins, History, Nature, Salvation, Beauty, Paradise and Mythologies) seem to fit so many Pre-Raphaelite paintings that they become almost meaningless. It’s difficult to tell why Holman Hunt’s portrait of patron Thomas Fairbairn appears in ‘Salvation’, for example, or why Millais’s beautiful ‘Chill October’ is in ‘Mythologies’ along with Burne-Jones’s Perseus cycle. Despite these anomalies, though, the extent of the exhibition is vast, and the delight of room after room of beautiful colours and lively images is hardly dimmed by this arrangement. It may, however, prove off-putting to those less familiar with the development of Pre-Raphaelitism, and, dull though it may seem, personally I would probably have preferred a chronological, cumulative developmental arrangement.

There are so many highlights, and so many beautiful paintings, rarely-seen gems and old favourites that it is difficult to give more than 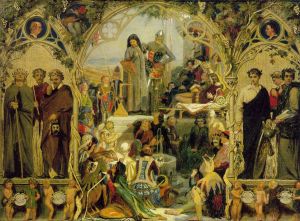 a very brief overview. Millais’s ‘Mariana’ (right; which I chose as my favourite painting for #PRBDay) is always a delight – the glowing colours, the medievalism combined with the realism – it is Tennyson’s poem come to life, for me, and I love it. Rossetti’s ‘The Blue Bower’ (above left) seems emblematic of High Pre-Raphaelitism: the woman (Fanny Cornforth – the Elephant, and she is surprisingly large!), the colours, the style, the blue and white background – this is Rossetti at his most sensual, florid, and irresistible, almost verging on the hallucinatory. It is marvellous to see pieces I hadn’t seen before, or for a while: I loved Alexander Munro’s Dante-inspired sculptures, and Deverell’s ‘Twelfth Night’; and Ford Madox Brown’s ‘Seeds and Fruits of English Poetry’ (left) is an old favourite, with its medieval, structured outline and depiction of the literary figures important to the Brotherhood. The exhibition certainly demonstrates the extent of the PRB’s engagement with literature: Dante, Shakespeare, Tennyson, Keats, as well as a range of other myths. 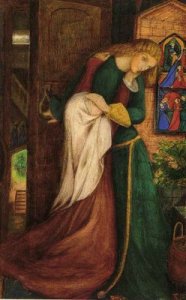 I also particularly enjoyed seeing some of Elizabeth Siddal’s paintings, set alongside Rossetti’s medieval series. Though this juxtaposition makes it clear that Siddal’s art is both more naive than Rossetti’s, and also clearly modelled upon his work, nonetheless I think Siddal comes out of it well: her work does bear scrutiny and demonstrably deserves more attention than it usually receives (though I am not sure that I agree with the gallery label that says that her ‘work pushed the boundaries of PRB practice’ – how?) For those legions of Siddal fans, this alone will provide a real delight.

The last two rooms provide particular joys: ‘Paradise’ is full of Morris’s designs – stained glass, wardrobes, the sublime Bird and Peacock carpet, and of course the lovely Kelmscott bed. ‘Mythologies’ contains Burne-Jones’s Perseus cycle, which I always think I shouldn’t like (gratuitous naked women again, monochromatic, gesturing towards Aestheticism despite its narrative strand) but somehow I find the paintings irresistible; I think it’s to do with their form, the way Burne-Jones plays with lines, figures, shapes and shades. The exhibition closes, of course, with the magisterial presence of ‘Astarte Syriaca’, watching over the visitors with a disdainful eye. In the end, the paintings transcend their setting, their juxtaposition, their arrangements, and visitors to the show will love or hate the PRB just as visitors to galleries have always done. Everyone should have an opinion, though, so I thoroughly recommend a visit – it’s a once-in-a-lifetime experience.