The Stones of Venice…are crumbling

Between 1851 and 1853, John Ruskin wrote about Venice, the city he both loved and seemed to condemn simultaneously. According to Ruskin, after its high Gothic Renaissance, Venice suffered a fall from grace, which he links to the moral fall of its citizens. For Ruskin, architecture was never just about buildings, about stones and aesthetics, it was always about morality, goodness, the state of one’s heart. The fall – brought about by the pride and gluttony of the Venetians, according to Ruskin – was further reflected in the dilapidated state of the buildings he visited, and he presents Venice as a moral warning to Britain, with ‘recognition that Venetian stones announced a larger message of human history; modern disregard for Venice’s heritage was only a continuation of the greed and luxury that the Renaissance introduced and which destroyed its Gothic Eden’  (quoting John Dixon Hunt‘s biography of Ruskin).

I think the way that Ruskin links aesthetics with morality is fascinating, and somehow both specifically Ruskinian and also broadly very Victorian. But I’m writing about this now for a specific reason: I see from the newspaper this week that the Venice in Peril Fund is 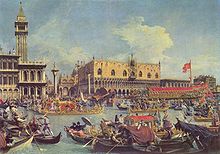 itself in peril. The Fund describes itself on its website:

The Venice in Peril Fund was created after the great floods of 1966 in Florence and Venice. The disaster led to dozens of private citizens donating large sums of money and Sir Ashley Clarke, former British Ambassador to Rome and chairman of the British Italian Society at that time, was asked to chair a committee to raise further funds to help rescue the two cities…. By the end of July 1967 it was decided that fund-raising activity for Florence should be wound down gradually and that efforts would be redirected to Venice where the serious damage had been to the structure of the city. 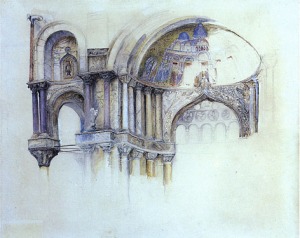 It seems that there have been disagreements over the ‘direction’ the Fund should be taking, and the chairman and many trustees have resigned. The honorary chairman, Nathalie Brooke, suggesting the fund should be closed, said that ‘the Italians could try harder to get money for restoration. The council in Venice were making no effort to do it themselves’, and added ‘Venice is going to be under water in a hundred years’. It seems tragic, though, that this fund, and indeed this city, might be abandoned due to disagreements; of course, I don’t know the details, but I’m pleased to see that Jonathan Keates has been appointed as acting Chairman for the Fund as of this week. But it is particularly poignant that human fallibility might be what precipitates the final, watery end of this fragile monument to human craftsmanship and beauty, particularly since Ruskin seemed to predict this: ‘Throughout the whole of Scripture history, nothing is more remarkable than the close connexion of punishment with the sin of vainglory […] the forgetfulness of God, and the claim of honour by man, as belonging to himself, are visited at once […] with the most tremendous punishment’. While Venice still stands, though scarred, Ruskin suggests that its architecture remains as a warning to those who see it to avoid the ‘insolent atheism’ of the past. We should heed Ruskin’s warnings.

This is an interesting site about Venice; and you can read Ruskin’s The Stones of Venice online here. Next year’s British Association of Victorian Studies conference (BAVS) will be taking place in Venice, so I might get to see it before it crumbles away…