I have recently re

ad John Polidori‘s The Vampyre (1819), which is thought to be the first English vampire novel (well, novella, really – it’s quite short). Polidori, as well as being Dante Gabriel and Christina Rossetti’s uncle, was Byron’s doctor, and travelled with him to Italy where the famous story-writing session which led to Mary Shelley’s Frankenstein took place. Polidori is not the best writer, perhaps, but he wrote a tale which gripped those with an interest in the currently-fashionable Gothic novel, and which has continued to exert its fascination over readers, perhaps because of its status as progenitor of the vampire novel. I wonder how many Twilight fans think about the literary-historical side of the vampire? There is some very interesting history to be read on this – have a look here and here. My interest is purely literary, and so I was fascinated to read about how Polidori adapted the conventions of (mostly European folktale) vampire literature, and thus changed readers’ views of the vampire forever.

Before Polidori, vampires were creatures, not recognisably human – either sub-human

species, or decaying corpses. They were evil, of course, preying on other humans, and they didn’t really interact with people. You would definitely have run screaming from a pre-eighteenth-century vampire. With Polidori, the vampire became more Edward Cullen. Lord Ruthven, Polidori’s vampire, is definitely human, even if he does have a taste for blood. He is aristocratic, attractive in a dangerous way, and, most significantly, a seducer of women: his victims are young women. The novel describes him thus:

‘Those who felt this sensation of awe, could not explain whence it arose: some attributed it to the dead grey eye, which, fixing upon the object’s face, did not seem to penetrate, and at one glance to pierce through to the inward workings of the heart; but fell upon the cheek with a leaden ray that weighed upon the skin it could not pass. His peculiarities caused him to be invited to every house; all wished to see him, and those who had been accustomed to violent excitement, and now felt the weight of ennui, were pleased at having something in their presence capable of engaging their attention. In spite of the deadly hue of his face, which never gained a wanner tint, either from the blush of modesty, or from the strong emotion of passion,

though its form and outline were beautiful, many of the
female hunters after notoriety attempted to win his attentions, and gain, at least, some marks of what they might term affection.’

What Polidori did, essentially, was to make the male vampire sexy and irresistible to women, although fatal to them too. The monster was watered down from the medieval tales, and given a socially acceptable face. Polidori’s vampire was powerful, able to act upon the minds as well as the bodies of his victims, and thoroughly evil, but nonetheless attracted his victims to him. The stereotype has been further watered down in modern depictions of vampires who want to be good (the Cullens, Spike and Angel in Buffy the Vampire Slayer) but it all started with Lord Ruthven.

Another interesting precursor to our modern vampire fixation is Byron’s poem ‘The Giaour‘, written in 1813, which Polidori acknowledges as an inspiration for his story. The giaour, or pagan, is condemned to become a vampire-like figure as punishment for committing a murder:

But first, on earth as vampire s 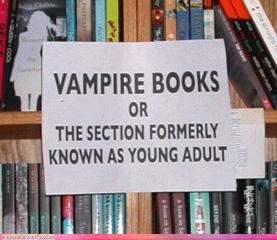 ent,
Thy corse shall from its tomb be rent:
Then ghastly haunt thy native place,
And suck the blood of all thy race;
There from thy daughter, sister, wife,
At midnight drain the stream of life;
Yet loathe the banquet which perforce
Must feed thy livid living corse:
Thy victims ere they yet expire
Shall know the demon for their sire,
As cursing thee, thou cursing them,
Thy flowers are withered on the stem.

The fate of the vampire is well-described here, and one can pity the character who is condemned to this fate, even though he will in turn kill others. Reading texts such as these begins to offer a more nuanced view of some of the somewhat one-dimensional vampire literature available today; historically, the vampire figure has a lot to say about society’s views: about their perception of death, for example; about gender relations; about faith and love.

You can read Polidori’s text and some information about him online, and ‘The Giaour’ is available here. There’s also some good background info and topics for discussion here.