Writing Britain at the British Library 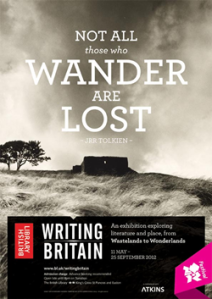 The exhibition ‘Writing Britain: Wastelands to Wonderlands’ at the British Library displays some of the most remarkable manuscripts of British literature, themed around the idea of a sense of place. The exhibition notes suggest that the places in which writers lived shaped their writing, but also that ‘Their novels, poetry and plays can shape our perceptions and transform our places through imagination’. The exhibition moves through different aspects of the geographical locations for writers in the British Isles – from Rural Dreams and Dark Satanic Mills, through Wild Places, Beyond the City, Cockney Visions and Waterlands. The exhibition is large, and I took nine pages of notes – which I will condense considerably here!

At the beginning of the exhibition, a video shows writers talking about location, including Simon Armitage, who says that ‘a sense of place and geography permeates everything’. If you don’t believe that at the beginning, you will by the end. The exhibition moves you from one aspect of British geography to another, with manuscripts, books, photographs, paintings and recordings to guide you on your journey. Rural Dreams, for example, suggests that writers of the countryside often memorialise vanishing traditions, such as Carol Ann Duffy‘s poem ‘John Barleycorn’, a tribute to the traditional English pub, drawing on much older traditions. I enjoyed listening to a recording of Duffy reading this poem, too. Much is made of how much literature rests upon ancient myths, such as Gawain and the Green Knight, and Robin Hood.

I did find myself beginning to play a game of ‘Which authors/books will be appearing in the next section?’, which I found quite satisfying, as it’s really not too difficult to guess that Gaskell’s North and South will appear in Dark Satanic Mills, there will be some Dickens in Cockney Visions, and some Hardy in Rural Dreams. The range of texts covered is quite remarkable, from Thomas Gray to Posy Simmonds; from the 10th century Exeter Book to Harry Potter. The thrill of such exhibitions, to m 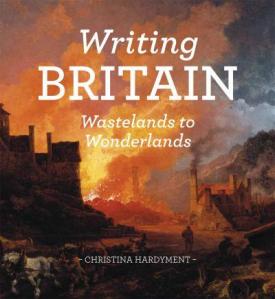 e, is of course seeing the manuscript of something I love; or just something I find mildly interesting: the notes for Ulysses, for example, are enough to make you doubt James Joyce’s sanity (if you didn’t already). Perhaps my only criticism, if it can be called such, is that the exhibition notes only give space for a small plot summary of most of the texts, and so if you didn’t know something about the books, you might be wondering why some had been included. But this is a small matter; the joy of the manuscripts, proofs, letters and other exhibits is too strong, and the organisation of the exhibition offers a real insight into the significance of place for British literature.

The exhibition covers so many bases, as well as celebrating the locale as well as the literature of the UK, that it is a fitting part of the Cultural Olympiad, celebrating nation and its achievements. So much ground is covered, both literally and figuratively – that I think it must have something to appeal to any visitor. From Blake’s London to Wordsworth’s Lakes, from Du Maurier’s Cornwall to Scott’s Edinburgh, this exhibition literally moves you.

There is an excellent review of the exhibition on the Times Higher Education website which I would recommend. The exhibition is accompanied by a catalogue by Christina Hardyment.