Dante in the Nineteenth Century 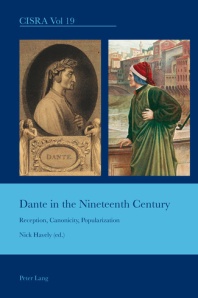 I’m very excited by the recent publication of Dante in the Nineteenth Century edited by Nick Havely, to which I contributed a chapter.

The nineteenth century saw the reinvention of Dante as a Romantic and national poet, his recognition as the canonical ‘central man of all the world’ and the Commedia‘s diffusion as a widely accessible text. Addressing these aspects of Dante’s presence during a key period of his modern reception, this collection of essays draws upon a number of papers given at the international conference ‘Dante in the Nineteenth Century’, held at the University of York in July 2008, and combines the work of established experts in the field with that of younger scholars who are breaking important new ground on the subject. It is distinctive in concentrating on the reception of Dante from Romanticism through the cult of Beatrice and mid-century criticism, translation and visual art, to the development of scholarship and popularization. The volume explores diverse nineteenth-century historical, intellectual, artistic and literary contexts in the cultures of Italy, France, the British Isles and the United States.

Timothy Webb: Stories of Rimini: Leigh Hunt, Byron and the Fate of Francesca

Fabio Camilletti: Ninfa fiorentina: The Falling of Beatrice from Florence to Modern Metropolis

Christoph Irmscher: Reading for our Delight: Longfellow and Francesca

Aida Audeh: Rodin’s Gates of Hell and Dante’s Divine Comedy: The Literal and Allegorical in the Paolo and Francesca Episode of Inferno 5

Spencer Pearce: Dante and Psychology in the Late Nineteenth Century

James Robinson: Purgatorio in the Portrait: Dante, Heterodoxy and the Education of James Joyce

You can find out more about the book here.