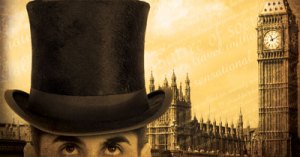 At the Old Rep theatre, Birmingham Rep are currently running The Importance of Being Earnest alongside Tom Stoppard’s play Travesties, with the same cast. But much more links the two plays than just the cast; if you can, it’s well worth seeing first Wilde’s play and then Stoppard’s, even if you’re already familiar with Earnest. The Rep Earnest is good; the cast seem sharp, and manage to deliver the lines with a freshness that sometimes escapes even the best cast (I always hold my breath before Lady Bracknell says, ‘A handbag?’ dreading too much emphasis). The plot, of doubles, confused identities, social mores and farcical happenings, is presented with little that is new, but that is perhaps just as well: it’s a solid, enjoyable performance, with Gwendoline and Cecily perhaps slightly more sparkling than Algernon and Jack. It would be difficult to fail to appreciate either the acting or the wit of Wilde’s play.

Travesties is likely to be less familiar as a play, but, like all of Stoppard’s plays, it is marvellously funny, clever, intertextual, and 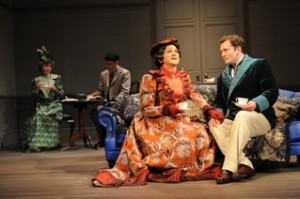 slightly devious. The play features a retired British Consul official, Henry Carr, reminiscing about his time in Zurich in 1917, when he met Lenin, James Joyce and the Dadaist Tristan Tzara. His reminiscences, however, become muddled with his part in a performance of The Importance of Being Earnest, so what we see is a confused version of events in which we can never be sure if what we are seeing is the truth. The cast do a great job of switching personas, so that we catch glimpses of Earnest alongside characters purporting to be historical figures. When one has recently seen Earnest, it’s also possible to see just how much Stoppard draws on and plays with Wilde’s play whilst creating his own, totally new play.

Travesties is funny; but not quite in the way that Wilde’s play is. It also makes some serious points, some of which are emphasised by the farcical, and indeed surreal, aspects of the play (which are usually derived from confusions in Carr’s memory). These serious issues relate to the war, in which Carr had served, and to the purposes and means of art (mostly dealt with in dialogues between Carr and Tzara, and Carr and Joyce), and to the rise of Communism and Russian politics. To pull off these two plays, with their multiple layers of meaning, intertextuality (not just Stoppard referring to Wilde,  but also I noticed a number of other direct quotations, including Tzara, Joyce and Lenin, of course, but also Wordsworth, Shakespeare and many more. I’m pleased to see that the Rep website features a guide to Travesties which, whilst designed for students and teachers, is likely to be of interest to many theatregoers.