Whilst at the Imperial War Museum, I also took in the exhibition on Women War Artists, which is on until November 27th. It’s quite a small (free) exhibition,  but includes some diverse and interesting paintings that demonstrate aspects of women’s engagement with war throughout the twentieth century. There are paintings which depict women war workers, such as Laura Knight’s famous Ruby 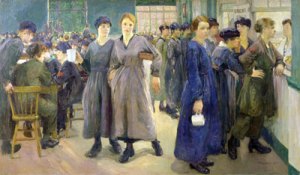 Loftus Screwing a Breech Ring (1943), right, and Flora Lion’s Women’s Canteen (1918), left, as well as some lovely individual portraits by Victoria Monkhouse. Each painting is accompanied by a brief discussion of the role of women as depicted in the painting, making it a very informative exhibition. There are, of course, paintings by women who went into war zones, using the title ‘Official War Artist’, commissioned during the Second World War (before then women could not use this title). Some of the paintings, such as those by Linda Kitson, were actually commissioned by the Imperial War Museum, when she went to the Falklands with the troops – the first time a woman artist had been able to do this. There are other battlefield images, but after the battle: Olive Mudie-Cooke’s images of the Somme and the Italian Front, for example.

Another very moving painting, and very famous, is Laura Knight’s The Nuremburg Trial (1946) – a very powerful painting which combines the stillness of the courtroom with the horrors of war. The pictures included in the exhibition record hospitals, sites of battles, ships, farms, a forge, factories, and the home front, such as Evelyn Dunbar’s The Queue at the Fish Shop (1944), below, a reminder of the hardships of life away from the heat of battle. The exhibition certainly shows an unofficial side to war as well as the development of the professional woman war artist. As the notes to the exhibition say, the cost of war is clearly counted in these pictures: ‘homelessness, exile, occupation, deaths and atrocity’ all feature, as well as experiences of the Blitz.