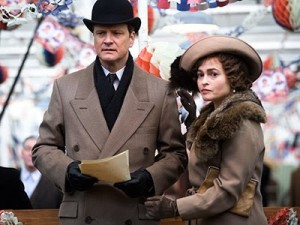 This afternoon I made a rare trip to the cinema to see The King’s Speech. The reviews I’ve read have all been glowing, tipping Colin Firth for an Oscar, and it’s been talked up to the extent that in a recent interview Helena Bonham Carter expressed a concern that the film itself might not live up to the building anticipation. Well, it does live up to it; it’s one of the best films I’ve seen in a while. It tells the story of ‘Bertie’, later King George VI, and his struggle with his speech impediment, which is more or less cured with the help of an unconventional Australian speech therapist, Lionel Logue.

The film opens with Bertie’s attempt to give a speech to thousands at Wembley, broadcast on the radio. This, and other speeches in the film, offers a tension rarely felt in the most tense thriller; Colin Firth portrays the anguish of Bertie’s terrible struggle to get out any words at all arouses a great deal of sympathy as we wait for his voice to return. Firth absolutely carries the film, though Geoffrey Rush as Logue and Helena Bonham Carter as the Queen Mother are also excellent. The relationships which sustain the future King are shown with enormous sympathy, particularly his developing relationship with Logue, who is, as Bertie says, the first commoner he has ever really spoken to.

The period detail in the film is great, too (though one does wonder about the deep fogs constantly in London – perhaps a metaphor for the troubled times), and the film offers humour, drama and pathos. The relation of a speech impediment to psychological issues, combined with the depiction of the characters (including the currently omnipresent Wallis Simpson, deeply unlikeable as usual) make it a fascinating film, but it is in the moving representation of George VI as a man committed to his family and his country, but suffering from the stigma of the second son, in the shadow of his more flamboyant (and also unlikeable) brother, that the film excels. I enjoyed it enormously.