Pirates of Penzance in Cornwall 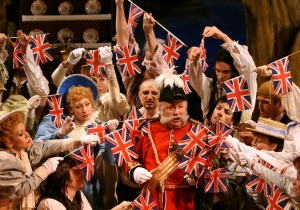 Last night we went to the Hall for Cornwall in Truro to see The Pirates of Penzance performed by the Carl Rosa Opera. I suspect it’s deeply unfashionable to like Gilbert and Sullivan, but I can’t help but enjoy it: I like its light-hearted approach, the way it sends up itself, operetta as a genre, and the times in which it was written. I like the amazingly complicated approach to plot (for example, the leap-year birthday which makes Frederick bound to serve many years as apprentice to a pirate – rather than a pilot, due to his nursemaid’s deafness – in Pirates. And how that is contrasted to the suddenly simple leaps of plot – how characters conveniently fall in love with each other for neatness. These things might be the mark of a truly awful production in the hands of others than Gilbert and Sullivan, but it’s done so neatly, with a nod and a wink to the audience, that it’s difficult not to succumb to its charms, in my opinion.

Last night’s performance did all that very well, and I especially loved the policemen, with their false bravado quickly replaced with exaggerated fear. Mabel was played very well by Deborah Myers, and her father, the “very model of the modern major-general” played by Barry Clark, went down a storm, all complete with period costumes. The Pirate King was played by Paul Nicholas, who I’d never heard of, but who, I gather, has performed a number of musical roles; I can’t think why, though, as his voice was the weakest aspect of the performance, and he hammed it up a bit much for my taste. G&S is hammy enough without turning it into an end-of-pier show as Nicholas seemed to do. Overlooking that, though, it was an enjoyable night out, especially when productions of G&S are so few and far between these days. The Carl Rosa Opera apparently aims to make opera available to all, and this was certainly a jolly and accessible performance (of a jolly and accessible operetta) which it is difficult not to like.