This week I was delighted to be able to attend the press preview of the refurbished home of Lord Leighton in Kensington, due to re-open to the public on April 6th. The house is one of the most unusual museums in London, designed by the painter with his friend, the architect George Aitchison, to house his remarkable collection of objets d’art as well as to provide the man himself with studio space and a home.

A new catalogue has also been published, including articles by Anne Anderson, Charlotte Gere and Barbara Bryant, and with introduction and further details by Daniel Robbins, curator for Leighton House Museum and Linley Sambourne House.

The house is striking in its collection of artefacts and its amazing use of colour throughout. The downstairs of the house features the Arab Hall, a large space decorated with Islamic tiles collected by Leighton, which, as the catalogue states, the house was adapted to display. This is perhaps one of the most memorable areas of the house, featuring screens, fountains, Persian

rugs and window seats – this is definitely a room made for languorous reading and relaxing!

The Eastern influence is particularly strong in this entrance to the house, but is continued throughout in objects collected by Leighton throughout his life, though the study off the Arab Hall, for example, is much more traditionally Victorian, displaying sketches and Morris fabrics, though also containing Persian rugs. The drawing room, with its Corots and Corot copies, is again more traditional, also featuring an impressive glass chandelier, while the dramatic colours of the dining room again suggest the artist’s eye for colour. The house itself provides an interesting study in the extent to which the Eastern influenced Victorian tastes in decor, and how this aspect fits into other contemporary styles and designs.

Upstairs, visitors are surprised by the bareness of Leighton’s bedroom, containing little more than a bed and some pictures on the wall; this Spartan space was what he preferred, it seems, and provides a startling contrast with the other areas of the house. There is no secondary accommodation for guests, which is as Leighton liked it, apparently, permitting him to entertain in his beautiful public rooms but not to put guests up for any length of time!  The large studio, with its natural light and dais for models, is now filled with paintings and sketches as well as a selection of painting materials used by Leighton. It also features a canvas store built into the floor, and a ‘models’ entrance’ so that the artist’s models need not enter by the main street door, but have their own entrance and staircase to reach the studio. 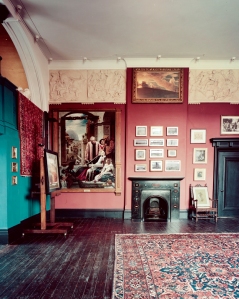 The opening up of the servants’ quarters, now redecorated in the colours originally used, show off the butler’s rooms in particular, and give a sense of the building as a working domestic home as well as a showcase for Leighton’s art and artefacts, which is appealing to visitors. A huge amount of work has clearly gone into this restoration, and it has been sensitively done with a great deal of research behind it, as the catalogue demonstrates. Yet little can really be seen of Leighton the man, other than his choices as a collector; it is Leighton the artist who prevails.