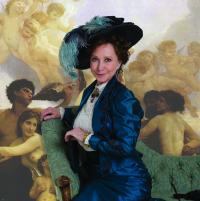 Last night was the last Birmingham show of Mrs Warren’s Profession, Theatre Royal Bath’s production with Felicity Kendal. It was good to see a full house, and the production really deserves it, too. In many ways it’s an awkward play, perhaps, because it is so much of a period piece, and because the central part of Vivie Warren is difficult to play credibly, but the performances from the whole cast are remarkably strong. Felicity Kendal is excellent – humorous and light but with obvious distress as the play reaches its conclusion, but she does not steal the limelight from Lucie Briggs-Owen, who plays Vivie.

The play was written in 1893, but banned from the stage until the 1920s due to its references to Mrs Warren’s profession, the details of which come out during the course of the play. The plot follows Vivie’s discovery that her (largely absent) mother has been making her money through a less than respectable profession (she was a prostitute, of course, and ends up running brothels across Europe). Vivie is at first forgiving, as she learns why her mother chose this way of life, and then shocked as she discovers that it still continues. This discovery affects her own life choices, including her own profession and potential marriage. The play is notable for its insight into the difficulties faced by women wishing or needing to be independent; I remember arguing in my university interview that Bernard Shaw uses his characters (notably St Joan) as mouthpieces for his own political and social views, and that’s equally true here, yet they are much more than puppets.

This production, with its beautifully crafted set and strong cast, brings out the nuances of humour as well as tragedy and social injustice. It’s on tour now; I recommend you see it.