Samuel Johnson: Now and in Time

This week, Birmingham City University in conjunction with Birmingham Book Festival celebrated the tercentenary of the life of Samuel Johnson with an 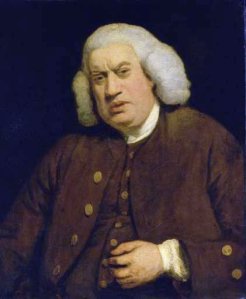 event entitled Now and in Time. Johnson, born in Lichfield in 1709, wrote extensively on a huge range of subjects, which were well-reflected by Professor Philip Smallwood’s discussions of Johnson, and in the readings from Johnson’s works. It is difficult not to be delighted by Johnson’s aphorisms, such as “A man of genius has been seldom ruined, but by himself” – there are plenty more here – you’ll be surprised how many are familiar to you, such as that second marriages are “the triumph of hope over experience”. This event, though, demonstrated how much more there is to Johnson than his pithy soundbites; Professor Smallwood highlighted the modern resonance of “Late Transactions Concerning Falkland’s Islands”, in which Johnson asks: “what continuance of happiness can be expected, when the whole system of European empire can be in danger of a new concussion, by a contention for a few spots of earth, which, in the deserts of the ocean, had almost escaped human notice, and which, if they had not happened to make a seamark, had, perhaps, never had a name!”

Other pieces, such as “The Life of Richard Savage”, show Johnson as shrewd observer of character, painting such a picture of his friend that one cannot fail to feel one knows the man; “To Mrs Thrale, On Completing her Thirty-Fifth Year” is both touching and (mostly) hilarious – as well as written extempore, which shows the genius as well as the humanity of Johnson:

For those who, like myself, spend much time commenting on other people’s artistic endeavours, Johnson has some salutory words in The Idler No. 60 – which show, perhaps, just how much he is the writer’s writer:

“Criticism is a study by which men grow important and formidable at a very small expence. The power of invention has been conferred by Nature upon few, and the labour of learning those sciences which may, by mere labour, be obtained, is too great to be willingly endured; but every man can exert such judgment as he has upon the works of others; and he whom Nature has made weak, and Idleness keeps ignorant, may yet support his vanity by the name of a Critic.”