Whilst in London I also went to have a look at the RA Summer Exhibition. As usual it was a fascinating mix of the traditional and the modern, with so much to see that it is extremely difficult to take it all in. The theme this year was “Making Space”, although as a curator admitted on the Culture Show, the themes are always loosely interpreted, and one wouldn’t guess the theme from the exhibition.

I was struck by how many of the exhibits seemed to have a fairy-tale atmosphere, some directly and some in their mysterious atmosphere. From Ken Howard’s Venetian scenes to Flight, Peter Messer’s delightfully surreal painting of a village with a man being carried away by birds on strings, there was a lot that I found visually very appealing. But, being as I am, what I really like is art that plays with language, and so my absolute favourite was a sculpture by Tom Phillips RA, called Wittgenstein’s Dilemma II. 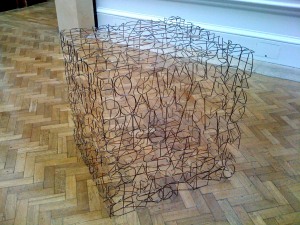 The sculpture is made up of steel words, which one can read from a certain angle but give the impression that one should be trapped inside the steel cage of words in order to read them (and it took me a while to make sense of them). The words read, over and over again, “The limits of my language are the limits of my world”, famous words of Wittgenstein. Since these words are repeated, they provide their own limits, and to emphasise this they form a cube, with language literally providing the boundaries. Yet, since one can read through them and see the space beyond, the limits are not really limits, merely a temporary barrier. It’s both beautiful and clever, and I loved it. There’s some intelligent commentary about it here.