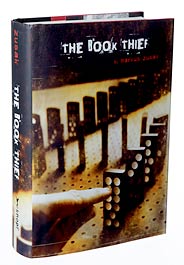 I don’t think I’ve ever read a book that has received so many accolades and awards as The Book Thief – a list of these take up most of the back cover. This made me instantly wary, I’m afraid, which was justified in some ways and not in others. On the one hand, it’s aimed at teenagers, and if they are reading books from which they might learn something – about humanity, about reading, and about history – that’s a good thing, obviously. On the other, it’s a little too self-conscious, a little too “here is the moral” for me.

The story is set in a small town near Munich during World War II, and follows the life of Liesel, a girl who, at nine, steals a book she cannot read, and, with her foster-father, learns to read it. She steals other books, later, one from a pile of books that are being burned on Hitler’s birthday, others from the library of the mayor’s wife. While she is living a young girl’s life – playing with friends, going to school – her foster parents hide a young Jewish man in their cellar, and she becomes close to him, reading with him at night.

Eventually he has to leave for fear of discovery, but his sojourn in the cellar has changed how Liesel sees the world. I won’t go into any more details for fear of spoiling the plot, but there is plenty of descriptive detail about life in Germany for those who did not support Hitler,  and Liesel is a strongly-drawn character with obvious appeal.

So far so good. However, I’m not convinced by the narrator, who is Death, personified, and who reassures his readers not to be afraid, as he will be gentle with them. Death can be moved by the events around him, it seems, but must inexorably do his work. I found this unappealing and rather an awkward device, though not as awkward as the constant  interruption of the text with little translations, comments, lists etc. I felt I could never really concentrate on the matter in hand because of the distractions the book itself provided.

The other comment I would make is that although Zusak’s writing is imaginative and descriptive, and will probably appeal more to teenagers than it did to me, sometimes I found his attempts to be original and say things differently both self-conscious and pointless. Every page has some unusual phrase on it (which I think is something Zusak has said he aspires to; and that’s not a bad thing, necessarily, it’s just that it feels intrusive when it happens so much). (For example, when Liesel is upset, “Something ridiculed her throat”. Hm.)

So, it’s not a bad book, but I didn’t find it especially thrilling either. I did like the way books play such a part in her life, though, and the idea that words are so important and can be both good (in books, between friends) and bad (in Nazi propaganda, for example). By stealing books Liesel can own them, and this is how she establishes her identity. Finally, I must add that I loved the comment in the New York Times that “Markus Zusak has not really written Harry Potter and the Holocaust. It just feels that way.”