The jury is still out, it seems, on whether we (be that the public, the Department for Culture, Media and Sport, or some mysterious other benefactor) should be prepared to fork out £100m to keep Titian’s “masterpieces” (always a loaded word), Diana and Actaeon and Diana and Callisto. Actually it’s a complicated situation: the paintings belong to the seventh Duke of Sutherland, who wants to “diversify his assets” – ie, sell some paintings. He has offered them to the National Galleries of England and Scotland for £50m each, or they’ll be sold on the open market and probably leave the UK and become unavailable to the public. Furthermore, the Culture Show mentioned that he also owns a fair proportion of the standing exhibits at the National Gallery in Edinburgh, and will have them back too if the Titians aren’t bought by the NG.
It was painted as one of a series of seven erotic paintings from Ovid’s Metamorphoses for Philip II of Spain in the 1550s. The story – roughly – is that Actaeon comes across Diana and her nymphs bathing, and in her fury she eventually has him killed as revenge for seeing her naked – which makes seeing the painting itself a somewhat illicit business. It’s a painting of exciting textures, colour and movement, as well as portents of Actaeon’s death.
So it’s a big deal, and a lot of money. But is it worth it? To my mind it’s worth it far more than the ridiculous excesses of the 2012 Olympics, which we really can’t afford. However, I went to see Diana and Actaeon last week, and am disappointed to say it doesn’t move me. Titian isn’t my thing, I suppose. I do see it’s a fascinating painting, and also a great teaching resource for getting people interested in art, which is a strong point in its favour. Can the money be raised by public donations? I hope so, actually. I appreciate the Titians without loving them, but they’re an amazing resource for the UK to have, and I sincerely hope we can hang on to them.
If you’re interested, you can donate money via the NG website here. 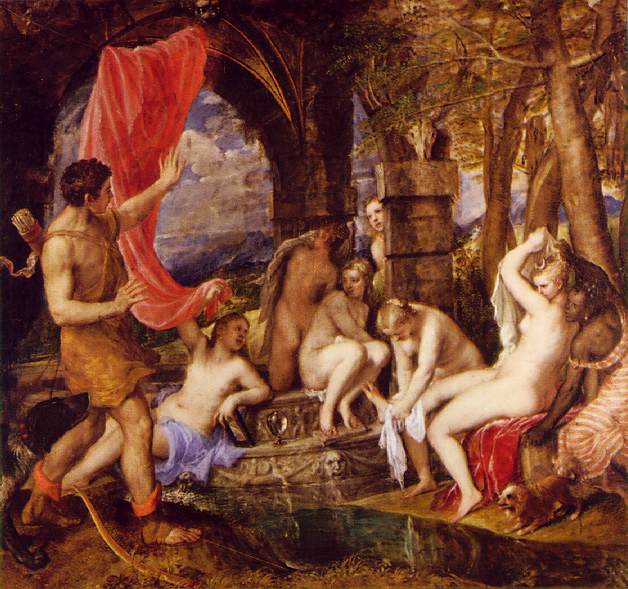