I tried to hold off reading The Testaments, but as the hype built and then the reviews started arriving, I gave in, and read it in two days. Few books besides Harry Potter get the kind of build-up this had, including the major launch in London, the pre-publication Booker nomination, and the endless speculation in the newspapers. Well, I’ve read it, and I wasn’t disappointed. It is, of course, very different to The Handmaid’s Tale, first published in 1985, read all over the world including as an A-level text in the UK, and of course televised as the Hulu series. When the first book was published, Atwood famously said that there was nothing in it that hadn’t already happened somewhere in the world, but still, it felt very dystopian, a world away from most readers’ experiences. The twenty-first century is scarily like some of the dystopias of the past, though; sales of dystopian novels have risen, from 1984 to Naomi Alderman’s The Power. so this world of Gilead where a theocracy rules and controls women’s lives and bodies seems uncomfortably close to the bone.

So, the book. Offred (or June, as her real name is in the series) is only peripherally involved; this novel has three narrators, but the narrative is controlled and structured by Aunt Lydia, less bloodthirsty than in the TV series but equally fierce. (Apparently Atwood had told the producers they couldn’t kill Aunt Lydia off). The other two are teenage girls, Agnes Jemima, who has grown up in Gilead and knows nothing of the world beyond it, and Daisy, who grew up in Canada but ends up on a secret mission into Gilead. Aunt Lydia’s voice dominates, though, but not in the quiet, powerless way that Offred’s voice 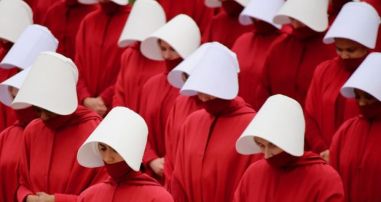 came across in the first book; this is a very different book, though framed by the trope of an academic conference of ‘Gilead Studies’. Sequels are never quite the same, though, so Atwood’s decision to embrace that difference in almost every way is a good one. And of course we will never be able to read The Testaments without the dramatic visuals of the TV series in our heads.

The Testaments offers the testimonies of women’s experiences of Gilead, then, as well as a confession, in Aunt Lydia’s case, and it is all about those three very different voices, filling in the blanks. These women are witnesses, and there is something compelling about their opportunity to tell their stories, in a place where women are silenced and most are even forbidden from writing. There is something quite postmodern about the book; this is in part due to its complex relationship with the TV series, which has taken on a life of its own and gone beyond the original book (although with Atwood’s blessing). Things that are part of the TV series (Baby Nicole; June’s real name, etc) appear in The Testaments, while other things are new (the blank-faced missionaries, the Pearl Girls, for example). It does feel as though a line is being delicately negotiated between the two written texts and the three series of The Handmaid’s Tale. The other interesting postmodern take is Aunt Lydia’s apparent awareness of her readers, combined with her ignorance of who that might be; it makes the reader almost complicit in her actions and it’s hard not to feel personally involved. She addresses the reader frequently, wondering who they are and under what circumstances they will read her narrative; she even, audaciously, suggests that the reader may be ‘a wish, a possibility, a phantom’ (p.173). There is something quite appealing about being accused of not existing by a fictional character.

The Testaments does give a lot of the answers that the last book and the TV series left me with. How did the coup occur that meant Gilead could begin? What happens to Baby Nicole, and June? How do they train the Aunts? This could be plodding, but it isn’t; there is a rapid narrative thrust to it which keeps the pages turning; but it’s not just a companion volume (I was worried that this would read like fan fiction to Atwood’s original novel) but instead a book with a thriller-style plot alongside the historical details. I’m reluctant to give too much away, but I will say that some of the ‘twists’ are easy to see coming, but are no less exciting for that.

It strikes me, reflecting a couple of days after I finished reading it, that there are two central issues at the heart of the novel. The first concerns the moral questions which

Aunt Lydia’s testimony forces us to address. In a terrible situation, do you resist and die, or co-operate? And if you choose life, how do you live that life, and make it emotionally bearable? What makes a mother? How many good deeds does it take to right a wrong? How can we fight the evil in the world? The novel indicates answers, but gently leads us to wonder for ourselves how we might react to extreme circumstances. The other issue is the power of words, or, perhaps, power and words. The maxim goes that history is written by the victors, but we don’t get the sense that the women whose voices are presented in The Testaments are either winners or losers: they are all, in their different ways, victims, although they refuse that role. We only have their voices, and the academic paper at the end considers whether their voices are true, or if this is more ‘fake news’. But because they speak, we believe them for the power their words give them, and the disingenuousness with which they – even the manipulative Aunt Lydia – express themselves. It is not a slow or trying read, but the book is inherently acutely literary, informed by the canon of literature from Milton to Pope (mostly in the references by Aunt Lydia), and aware of its place in history and literature and the cultural reference points to which it is linked.