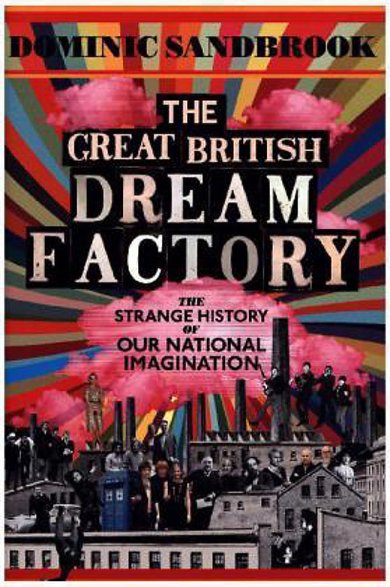 Dominic Sandbrook is a historian of the twentieth century, and this is apparent in his book The Great British Dream Factory, reviewed to considerable acclaim when it was published in 2015 (see The Guardian‘s review here, for example). The book attempts to explore the landscape of the British cultural imagination, and consider why certain movements, interests and developments have occurred over the last hundred years or so, and his forensic understanding of historical events and politics are brought to bear on this. Perhaps that doesn’t make it sound like fun; but it is. Sandbrook writes with humour and exuberance, covering a huge range of cultural genres and artists. The preface begins with the opening ceremony of the 2012 Olympics; the first chapter discusses the origins of heavy metal music in the West Midlands in the 1970s. Why Birmingham? What forces collided at that cultural moment to create the band Black Sabbath, for example? It’s a fascinating question, and one which Sandbrook answers convincingly.

On the whole, the book focuses on popular culture: the Beatles make a few appearances, and there is a long section on Dr Who. Other highlights include David Bowie, boys’ boarding school books (especially Billy Bunter), soap operas, science fiction, the rise and fall of British film, and many, many other things. There were a lot of cultural phenomena here which I hadn’t read/seen, although of course they are part of a cultural

consciousness so I was aware of them, but in a narrative which jumps back and forwards, moving from one time and place to another with some slightly tenuous links, the book moves forward with the force of a steam train and takes the reader with it. It’s divided into (fairly loose) sections: ‘Made in Britain: From the Workshop of the World to Cultural Superpower’, ‘Play Up! Play Up! and Play the Game!: The Victory of the Old Order’, ‘We are the Martians: British Culture in the Shadow of the Past’ and ‘Going to the Top: British Culture and the Triumph of the Self’. These move from an insular culture which is concerned about the Americanisation of British culture, via Hollywood, through to the ‘new individualism’, in which the self is put before everything else. The Guardian review suggests that the book should do more to address the failure of British popular culture to renew itself in the 21st century (which I’m not sure I agree with, but perhaps I’m not the best judge of popular culture), but I think perhaps implicitly the last section does this, by suggesting that this focus on the self is a return to insularity (perhaps charged by Brexit-related problems).

I’m interested by the extent to which Sandbrook traces British culture back to the nineteenth century (and sometimes the Industrial Revolution). There is a lot about the significance of Dickens, H G Wells, and, particularly, William Morris. The (possibly slightly exaggerated) message I’m left with is that British culture in the 20th century owes a great deal to nostalgia, class and the friction between left and right, and Morris. There is also a really interesting exploration of the debt to Samuel Smiles (who wrote Self-Help in 1851 and indicates ways in which one might self-improve). And Sandbrook dismisses Virginia Woolf as elitist, several times, which is one of the less well-considered points. I don’t agree with everything he says, but it’s an enormously informed and exciting book and I found much to ponder. In troubled political times (to say the least!), it’s inspiring to think about the culture which might be generated in the future from these difficult periods.

As a final thought, I read this in the paperback, with its cover of grimy walls in shadow. The hardback is an explosion of colour. I wonder why British culture has been given such different representations?!