I’ve said this before, but I love the Royal Opera House’s live screenings (though sadly most of them clash with my ballet class), for the interval discussions onscreen and the closeups. I managed to see the recent triple bill, ‘Within the Golden Hour’, ‘Medusa’ and ‘Flight Pattern’, and I’m so glad I did. I’d read some mixed reviews, particularly of the new work, ‘Medusa’, premiered this season, and have had chance to form my own views, which I will condense from the 20 pages of illegible notes I took! The three ballets work well together, moving from the light to the dark, but with a thread of connection and human relationships holding them together.

‘Within the Golden Hour’, by Christopher Wheeldon with music by Ezio Bosso and Vivaldi, was created on San Francisco Ballet but first performed by the Royal Ballet in 2016. It’s an abstract piece, with seven couples who dance in various combinations, and for this production there are beautiful, diaphanous costumes designed by Jasper Conran 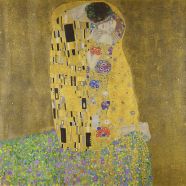 which reflect the light and move beautifully.  Wheeldon acknowledges the influence of Klimt’s ‘golden period’ in creating the ballet (The Kiss, right), and that is beautifully reflected in Conran’s designs. Wheeldon said in an interview that the beauty of abstract pieces is that the audience can imagine their own stories, and that’s very true here: without a narrative, one looks differently, for connections, symbols, repetition, in order to make sense of it. The first part, in which all dancers perform, is lyrical and stately, with an apparent Eastern influence in some of the movements. Each pas de deux which follows is different; one playful, another more tender, interspersed with different groupings including a male duo who dance like Ancient Greek athletes, thrilling in its athletic muscularity. Another pas de deux is almost rapturous, gentler and more classical.

Overall the ballet seemed to me to suggest how we might consider and refigure human relationships in society – in groups, with partners, bodies moving in tandem and apart again. The couples don’t dance in isolation but as part of a shifting framework of social relations to the other dancers on stage, sometimes mirroring each other but not completely, so that individuality is retained within the group. The mood-changes are emphasised by the lighting, but the effect of goldenness is continuous; it made me think of Shakespeare’s lines,

Golden lads and girls all must,
As chimney-sweepers, come to dust.

That’s quite appropriate, given the trajectory of the ballets over the evening, from the blissful to the tragic. The next ballet, ‘Medusa’, is more troubling. Sidi Larbi Cherkaoui, the choreographer, says that mythology is often about action and reaction, and

consequences, which is reflected in the dance. Reviews have commented that the story of Medusa is difficult to follow, but (perhaps given what I’d read beforehand, and the interval discussions), I didn’t find this the case on the whole. In the ballet, Medusa (Natalia Osipova) is one of several priestesses at the temple of the goddess Athena (Olivia Cowley, resplendent in a sort of gold leather bikini top, and marvellously dignified despite this). The opening scene shows the women dancing in their sacred space with their goddess, inviolate and untouched by the controlling influence of men, and Medusa’s rapture at Athena’s affection is palpable. Yet when the soldiers are introduced and she dances with Perseus (Matthew Ball), the music changes from the electronic music to Purcell, and the connection between them as she gives him her scarf is perhaps surprising. Perseus seems to see the jealous Poseidon (Ryoichi Hirano) take hold of Medusa as he leaves the stage as, touched by one man, Medusa becomes prey to another. The pas de deux is carefully ambiguous; Medusa is frightened but does not always appear unwilling (the uncertainty reminds me of Tess of the D’Urbervilles; there is no doubt she was taken advantage of, but the extent is in doubt). The rape is clearly implied, though, after which Osipova is held in mid-air, suspended as if frozen in panic, her expressive face full of panic as to what will happen to her next.

As Poseidon watches, Athena enacts her punishment on her priestess (because she cannot punish the god); Purcell’s music here speaks of love which endures, ironically. Medusa’s transformation from beautiful woman to monster requires a kind of conjuring trick, performed behind a scarf (the scarves appear at crucial moments: the first dance with Perseus, her transformation, and her death). Afterwards, Medusa is utterly 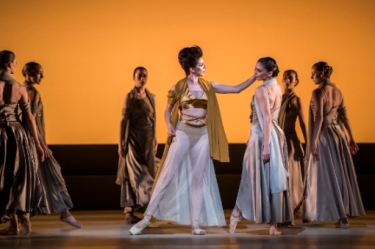 different: her fear has gone, and in every revelling movement of her body Osipova indicates the strength that monstrosity and freedom from masculine control has afforded her. She is outcast and alone, but no longer trembling; she triumphantly dances with soldiers and breaks them, yet the stripe down her face mirrors Poseidon’s, suggesting she bears the mark of her attacker. When this Medusa dances with Perseus there is a seductive, conflicted, violent air to the choreo, with a tender side which is reflected in Purcell’s song. As he avoids looking at her, she pulls his hair, aims a swift kick at his head, plays with him, and dares him to look at her and risk death – and yet it seems he cannot stop dancing with her, yet she shows him how quickly desire can turn to violence. The programme notes and discussion with Cherkaoui suggests she lets Perseus kill her, but in fact that didn’t really come across to me; I found the end – with Medusa returned to a woman, sad and confused, the most ambiguous part here, and less certain of its way. Osipova touches her head, as if missing her snakes, and the ballet ends as it began, with Medusa on the temple steps with her golden bowl. Has nothing changed? Yet surely her death should free her. It’s not clear, but I loved it anyway.

Interestingly, I think the ballet plays with the idea of ‘classical’, and what that means to us – a classical myth is enacted in fairly contemporary dress, classical ballet is reshaped and reformed to produce something angular, strong and frightening, classical music is used ironically and interspersed with trance-like electronic music, while the solid golden pillars which appear on set are both echoing classical temples and seem strangely Modernist.

Finally, ‘Flight Pattern’, Crystal Pite’s Olivier award-winning work, is something very different. (There’s a great video about it here). Thirty-six dancers move together, creating, in Pite’s words, a ‘beast’, a group mentality, in which individuality is still 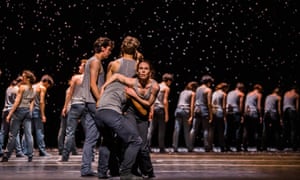 possible, and significant; the tension between the individual’s needs and the needs of the collective form the structure of the piece. Gorecki’s music, ‘Sorrowful Songs’, is perfect, using words from a mournful Silesian folk song of a mother searching for a lost child, words scratched on the wall of a Gestapo prison cell, and a Marian hymn. This work is Pite’s urgent response to the humanitarian crises of recent times, and the title has several layers, with ‘flight’ mean to flee, to escape, but also to fly, to experience freedom – there are layers of hope here. Ballet doesn’t often have a political message, and I’m not sure that ‘message’ is the right word here, but what this ballet does is make you feel – despair, anguish, hope – the wonderfully expressive movements on stage – sometimes by one dancer, sometimes echoed by several, and sometimes by the whole group – are very moving. As the stand close together, even the smallest simultaneous movement such as breathing can feel like an earthquake. Pite thinks art is about connecting, opening channels, and it is easy to see how a work such as this can be utterly absorbing, as though the audience too are absorbed into the collective movements on stage.

This ballet is timeless and placeless; the dancers wear grey, with coats they remove to reveal white vests, all dressed identically. They move together, then some will break out, try to outrun others. A woman cradles a child – only it is her coat, and there is no child there. She squirms in anguish, as others come and pile their empty coats on her, until she collapses under the weight of the burden of others’ sorrows, at which point her suffering again becomes collective and the group writhe and roll, expand and contract with their visible emotional labour. Sometimes they seem to fly, and there is an interesting sense of movement, fleeing, yet never going anywhere and remaining in stasis. Finally, as the body of dancers is taken in and door closed behind them, one male dancer is left outside, expressing anger so strong he claws at himself, as if he wishes to destroy his body for its flightlessness. The searching mother is exiled with him – and darkness falls. ‘Flight Pattern’ is balanced between abstract and narrative, with emotion taking precedence to all else, daring the audience to empathise and connect.