Sabrina is the mythical figure who gave her name to the River Severn which flows from Wales through Worcestershire to Gloucestershire, and I seem to keep finding her at the moment. She appears in Geoffrey of Monmouth’s The History of the Kings of Britain, in which the King Locrinus deserts his wife, Gwendolen, and has a child by another woman; that child, whose name is Sabrina in Latin, Severn in English, Hafren in Welsh, is drowned by Gwendolen in the river, along with her mother, and gives it her name. Subsequently, legend has it that she has become the nymph of the river; she is also known as a goddess. Milton writes of Sabrina in Comus, in which the water-nymph is conjured and rescues the Lady from her plight because she is pure of heart. As agent of freedom, then, Sabrina is seen as powerful, mystical, and sympathetic to women who fall victim to a patriarchal system which undervalues and confines them. Milton’s description of Sabrina is worth quoting here:

There is a gentle Nymph not farr from hence,
That with moist curb sways the smooth Severn stream,
Sabrina is her name, a Virgin pure,
Whilom she was the daughter of Locrine,
That had the Scepter from his father Brute.
The guiltless damsell flying the mad pursuit

Of her enraged stepdam Guendolen,
Commended her innocence to the flood
That stay’d her flight with his cross-flowing course,
The water Nymphs that in the bottom plaid,
Held up their pearled wrists and took her in,
…
And underwent a quick immortal change
Made Goddess of the River; still she retains
Her maid’n gentlenes, and oft at Eeve
Visits the herds along the twilight meadows,
…
The clasping charm, and thaw the numming spell,
If she be right invok’t in warbled Song,
For maid’nhood she loves, and will be swift
To aid a Virgin, such as was her self
In hard besetting need, this will I try
And adde the power of som adjuring verse.

Sabrina is on the side of women, then (despite her father’s wife causing her death); perhaps she sees that her father was the cause of the problem. There is also a description of ‘Sabrina fair’ (also the title of a play, turned into a 1954 film by Billy Wilder with Audrey Hepburn and Humphrey Bogart), with ‘amber-dropping hair’ (presumably orange like mine), and she is a figure who has caught the imagination of a number of people before and after Milton. Keats was app

arently  fascinated by the story and planned, shortly before his death, to write a poem of Sabrina.

I only discovered Sabrina’s existence outside of Comus because I found her, first in the grotto in the wonderful grounds at Croome Park, and then in Worcester City Art Gallery. At Croome, she reclines beside the grotto in the Capability Brown landscape, and she is perfectly in keeping with the neo-classical grounds, featuring a number of statues, follies and other diversions to entertain the cultured 18th century visitor. Of course, in this and other representations, she is no longer a child; she is fully a nymph, topless despite the excessive amount of fabric around her. At Worcester, she is a bronze statue, Sabrina Thrown into the Severn (1880) by William Calder Marshall, again fully grown and naked (which tells us a great deal about the portrayal of women in art). Here, she is delightfully situated as though about to be thrown over the balcony into the gift shop. There is also a Sabrina statue at Shrewsbury (1846), with a quotation from Milton, by Birmingham sculptor Peter Hollins (below). Since I seem to be Sabrina-spotting, I’d be interested to hear of any other representations of her in the Worcestershire area that I haven’t yet found! 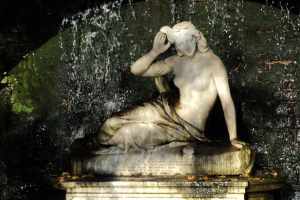