An Evening with M R James 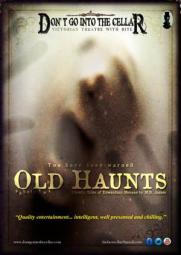 I do like M. R. James’s stories. They are terrifying, though often perpetually obscure, and delight in the macabre and the terrifying. James (1862-1936) was an academic, a medievalist and bibliophile who spent much of his life at Cambridge, and most of that in libraries. There is an aura of the obscure, arcane dustiness around him and his work, though he was also a man with a wicked sense of humour and an interest in the mysterious, the supernatural and the downright terrifying. Many of his stories feature a protagonist not unlike himself: a professor, librarian or antiquarian of some sort, who investigated a little too much, was perhaps a bit too curious, and suffered the terrible consequences of this. There is something terribly English about James’s writing.

He liked to gather his friends to tell them his ghost stories, especially in the winter

months when the nights were long. Yesterday evening I went to the Birmingham Midland Institute (my second home at the moment) to a performance of Old Haunts, by Don’t Go Into the Cellar Victorian Theatre Company. In the Members’ Room, dimly lit, ‘Monty James’ sat in a large leather armchair and told us some stories, with just a few props, and some special effects. His manner was perfect – it’s the sort of thing that could easily become horribly twee, but he had just the right mix of menace and jocularity as he told us ‘Casting the Runes’ and ‘Oh Whistle and I’ll Come to you, my Lad’, along with other tales and chatty digressions. The script also included some of James’s own thoughts on the writing of Gothic stories, which I’ve used in teaching James:

Reticence may be an elderly doctrine to preach, yet from the artistic point of view, I am sure it is a sound one. Reticence conduces to effect, blatancy ruins it, and there is much blatancy in a lot of recent stories. They drag in sex too, which is a fatal mistake; sex is tiresome enough in the novels; in a ghost story, or as the backbone of a ghost story, I have no patience with it. At the same time don’t let us be mild and drab. Malevolence and terror, the glare of evil faces, ‘the stony grin of unearthly malice’, pursuing forms in darkness, and ‘long-drawn, distant screams’, are all in place, and so is a modicum of blood, shed with deliberation and carefully husbanded; the weltering and wallowing that I too often encounter merely recall the methods of M G Lewis. 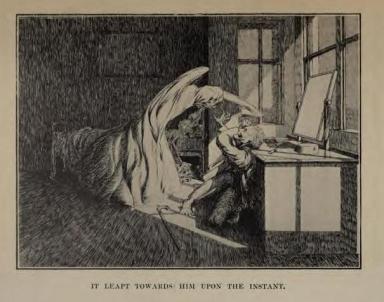 There is certainly nothing ‘mild and drab’ about James’s stories or the performance. There were plenty of shocks – being suddenly plunged into darkness, hearing terrible screams, flashes of light and so on – it reminded me of the spectacle of Victorian shows, from spiritualism to conjurers, who enjoyed the effects on their audience much as ‘James’ did in Old Haunts. There were plenty of people visibly jumping with shock last night, but it’s not just about thrills: James’s stories make us draw closer to the light for fear of the dark, a primal sense that we need both the horror and the warmth to feel fully alive. There is something joyous in that, which the character of James clearly revels in, and which Gothic literature always indulges to the utmost. Victorian performance, like Victorian literature, particularly sensation literature, asks us to be fully involved emotionally and intellectually, because this full participation makes us vulnerable and therefore more susceptible to its effects. Don’t Go Into the Cellar seem to know this and play on it, and it works brilliantly, especially in such an intimate atmosphere as a small, crowded, dimly-lit Victorian room.