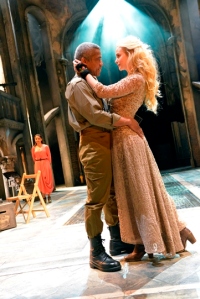 Last night I went to the cinema to watch the live broadcast of the Royal Shakespeare Company’s Othello. I think these live broadcasts are wonderful: though it’s not the same as being in the theatre, you do get some of the feeling of excitement whilst waiting for the play to start, and it’s more accessible and cheaper than going to the theatre, too. I’d heard on Radio 4 about some of the ground-breaking things that this production does, and it didn’t disappoint. The acting is superb, convincing and emotionally sustained throughout; Hugh Quarshie and Joanna Vanderham as Othello and Desdemona are genuinely heartbreaking.

There are a number of ways in which this play is a very contemporary Othello, directed by Iqbal Khan; firstly, the thing for which it has been making headlines is that not only Othello, but also Iago, is played by a black actor, which makes it seem that Iago is not motivated by racism, as is so often assumed. This approach doesn’t do away with the race aspect of the play; the language is suffused with notions of ‘light’ and ‘dark’, and the relationship of Othello and Desdemona is unchanged, but it does make us look at the relationship between Othello and Iago in a very different way. Similarly, gender is also played around with here: the Duke is female (a great touch), commanding military men and women, and Desdemona is by no means a meek, obedient wife: chaste, yes, but not a doormat – this is certainly a production which plays up the 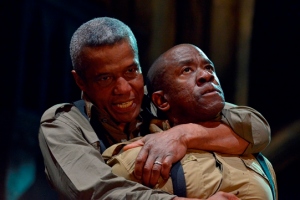 I like Shakespeare in modern settings. If we think that Shakespeare’s work is timeless (which I do) then it seems wilful and pointless to be a “purist” and insist on it being played in doublet and hose when it offers such a wonderful range of opportunities to do something different. Here, the military context is played up: after all, Othello is a general, a military man, and as the interval discussions in the live broadcast suggest, the reason that Othello trusts Iago’s assertions about his wife is because of their background as men who have fought together and trusted each other with their lives. It goes further than that in this production, though: there are scenes reminiscent of Abu Ghraib, of prison 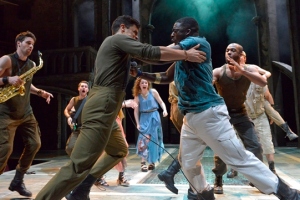 ers being tortured and of casual violence. Though we also see the camaraderie of the military, the high spirits when the fighting is over, we also see how everyone – even Desdemona and Emilia – has become blasé about the prevailing air of violence, and that, I think, makes us think differently
about the characters. This violent backdrop makes the murder of Desdemona less surprising, I think, though no less shocking.

The production brings out the contrast between light and dark which the play develops and returns to repeatedly. Not only in the obvious (skin colour) but in clothing, in lighting and staging, this contrast is emphasised. The dialogue does this too, of course, and ultimately brings out the idea that it is not dark or light in skin colour that matters, but the dark and light in human behaviour, in the mind, in human actions, that matters. This culminates in Othello’s tragic speech before the death of Desdemona:

Let me not name it to you, you chaste stars,
It is the cause. Yet I’ll not shed her blood,
Nor scar that whiter skin of hers than snow
And smooth as monumental alabaster.
Yet she must die, else she’ll betray more men.
Put out the light, and then put out the light.
If I quench thee, thou flaming minister,
I can again thy former light restore
Should I repent me. But once put out thy light,
Thou cunning’st pattern of excelling nature,
I know not where is that Promethean heat
That can thy light relume.

That ‘Put out the light, and then put out the light’ was tear-jerking in this performance; Othello’s tragic flaw and the result of it, of loss, death, and darkness, is both cathartic and heart-breaking. Yet the play also moves between light and dark by contrasting moments of humour and scenes of joy with the darkness of the heart, and in that lies its greatest strength. Lucian Msamati as Iago embodies both light and dark; he is not only wicked, but also funny – and remains convincing in both throughout, which is no small feat.