The uneventful life of Thomas Hood

Occasionally one sees a book that just has to be bought, which is how I felt when I saw W.M. Rossetti’s edition of the poems of Thomas Hood (1799  – 1845) in a bookshop at the weekend. Not only does it combine a poet I keep meaning to find out more about with an editor I am interested in, it’s also a rather handsome book (I think it looks better in the paper, so to speak, than in the photo). It also has illustrations by Gustave Dore, which I have also attempted to photograph.

Besides its appearance, it has other interesting aspects, not least being WM Rossetti’s ‘critical memoir’ of Hood. In my research on Christina Rossetti I frequently warn people to take  her brother’s critical memoir of her with a pinch of salt, since he was clearly attempting to shape his sister into what he saw as an appropriate poetess. I don’t know enough about Hood to know if he is doing the same thing here (and indeed he admits that his information is a

lmost entirely from Hood’s children’s Memorials of their father), but I do know WMR well enough to know when he is a bit unsure of what to say. The Memoir begins: ‘There were scarcely any events in the life of Thomas Hood.’ Rossetti also admits his subject was not a prepossessing chap (see right), and dogged by ill-health and money worries. So far, so unappealing. However, if, like me, your main acquaintance with Hood is ‘The Song of the Shirt’ and ‘The Bridge of Sighs’, what comes next is surprising. “His excessive and immeasurable addiction to rollicking fun, to the perpetual ‘cracking of jokes’ … is a somewhat curious problem. … The influence of Charles Lamb may have had something to do with it – probably not very much.” Reading the Memoir, it is clear that Rossetti is confused and a little put out by the humour of Hood’s personality and much of his work, and doesn’t really know how to approach it.

When one comes to the poems, this humour is apparent in many of them, though since these are less famous than his melancholic works, one feels that perhaps posterity, on the whole, agrees with WMR. ‘Miss Kilmansegg and her Precious Leg’ is perhaps the best known of his humorous works, and parodies the sentimental tone that he uses in seriousness elsewhere. ‘Faithless Nelly Gray: A Pathetic Ballad’ is an excellent example of Hood’s ability to parody traditional forms, producing a poem which is simultaneously macabre and grotesque, humorous and parodic, and a demonstration of his skill. But there are other serious works, too, such as his ‘Ode to Melancholy’, which seems to owe something to Milton’s ‘Il 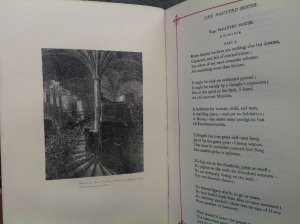 Penseroso’, but at the same time gives you the uncomfortable impression that the poet is laughing at you across the centuries, for taking seriously his high-flown sentiment. ‘Ode on a Distant Prospect of Clapham Academy’ clearly satirises Gray’s poem, but others, such as ‘I Remember, I Remember’, which I learned as a child, offer a genuine sentiment which is difficult to dismiss as parody or irony.

There are too many poems that I find interesting in this book for me to do justice to them all in a blog post, so I will close with one I found particularly unusual. ‘The Haunted House’ is one of the longer poems, and one which takes a deserted Gothic mansion for its setting. It’s evocative, drawing on the tropes and aesthetics of the Gothic genre – and yet it leads nowhere. It is, ultimately, an exercise in revealing the futility of searching for an ‘atmosphere’ in a poem, for this poem, well-constructed, allusive and enjoyable, is nothing but atmosphere. It goes nowhere, tells no tale, and ultimately refers any mystery back to the reader. Such games can only be played by a poet confident of his craft, and Hood’s collected poems show that he was most certainly that, and a remarkably versatile and enjoyable poet who deserves, in my opinion, to be better known.